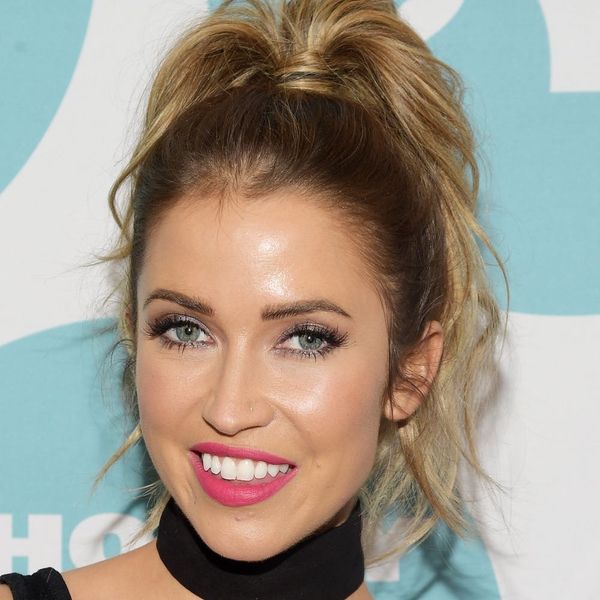 As Rachel Lindsay navigates her way through dates in Switzerland, former Bachelorette Kaitlyn Bristowe is making her way through the wonders of hair dye! The natural brunette, who has been rocking much lighter locks of late, switched things up again, this time with a pretty tint of rose gold.

PINK HAIR. And now that I have your attention. I would love for everyone to listen to the new Off The Vine podcast. It's powerful stuff today. Real, raw talk with @erintreloar, founder of @rawbeautytalks on the social media highlight reel, what it actually takes to feel good in your body and simple ways to build self esteem. One of my favorite ones yet. Podcastone.com download the podcastone app or subscribe on Apple podcasts. Download rate and review, I think you guys will love this one. #offthevine #podcast @podcastone

The fashionista showed off her new dye job over on social media, writing “PINK HAIR.” Leaving her roots untouched, Bristowe went for pink peekaboo streaks — and now we have an instant hankering for refreshing summer rosé.

Her tress debut also doubled as a platform for another agenda. “Now that I have your attention,” Bristowe wrote, “I would love for everyone to listen to the new Off the Vine podcast. It’s powerful stuff today.”

The reality alum-turned-radio-host, who launched her show back in May, had some beauty-related pearls of wisdom to share with listeners as she discussed ways to build self-esteem and what it takes to feel good about yourself in the age of social media with Raw Beauty Talks’ founder Erin Treloar. It’s a topic Bristowe, 32, knows plenty about, having recently revealed the body-related pressures she faced on the show.

I have so much freakin fun traveling with him. That's how you know it's true love. Or maybe it's flying first class. Either way. . Next stop VANCOUVER city strong. Saturday 11am. Tickets still available at CitySTRONG.com #DontLetMeDownVancouver @yourcitystrong

The fun new color was quite the change for the Canadian transplant, who was blonder than ever while en route to Vancouver with her beau, Shawn Booth just five days ago. “I have so much freaking fun traveling with him,” she wrote. “That’s how you know it’s true love. Or maybe it’s flying first class. Either way…”

Are you listening, Rachel Lindsay?

Are you living for Kaitlyn’s new look? Tell us over @BritandCo.