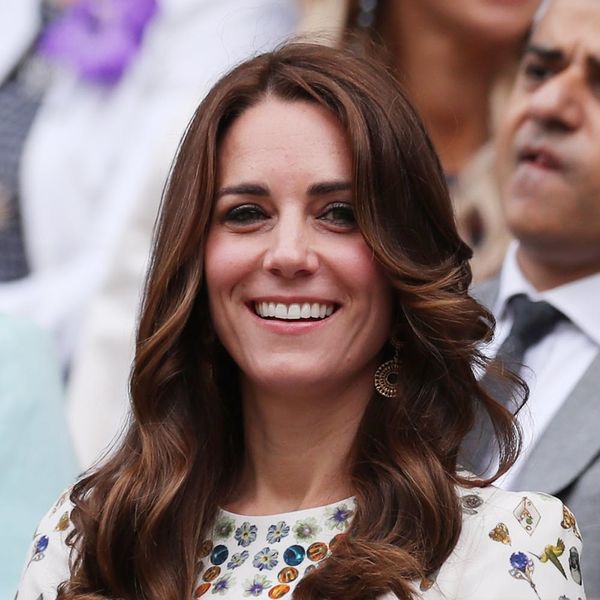 Netflix’s new $100 million drama, The Crown, may take us back to Queen Elizabeth’s ascension to the throne, but for just a few moments, come with us to the year 2010. Prince William, our generation’s IRL Prince Charming, had just proposed to Kate Middleton. The world was ready to embrace a new princess (or duchess, as she would become), and when the official engagement photos were released, pretty much everyone swooned hard over Kate’s dreamy blue dress. Well, now it’s back in stock and more affordable than ever.

The Issa dress instantly sold out the moment the pics of the new royal duo hit the press. At $535, it was much more affordable than many suspected, but still quite a budget-buster for others. A deep blue silk-jersey wrap-dress that shone in the lights of the cameras, it could only be outdone by the engagement ring that had been given to her by William and was once worn by Princess Diana.

Now the dress is back as the Gisele, a belted dress with a “flattering v-shaped neckline and cross-over ties that accentuate the narrowest part of your silhouette.” Ready and waiting for orders, the best news is that it’s now selling for a mere $175. Not bad at all for a look that is part of our current history-in-the-making.

Available in sizes 4 to 18 and in either blue or pink, this is a look that surely anyone and everyone could pull off with a little class and a whole lot of style.

Will you be ordering your own Gisele dress? Tweet us @BritandCo!

Desiree O
Desirée O is a ‘Professional Bohemian’ who loves anything and everything related to the arts, entertainment, and pop culture. She ADORES being a ‘Newsy’ for Brit + Co, covering all of the latest tidbits of awesomeness that you want to read about. When she’s not writing, she’s either making messy art, going on long adventurous walks with her camera, or poking around over at bohemianizm (http://www.bohemianizm.com/). You can find out about Desirée O and her work at http://DesireeO.com/ or follow her on Twitter @DesireeO.
Celebrity Style
Style News
Celebrity Style Royal Family
More From Style News