Women Who Run: Why a Mother of Four Decided to Run for Office for the First Time Ever 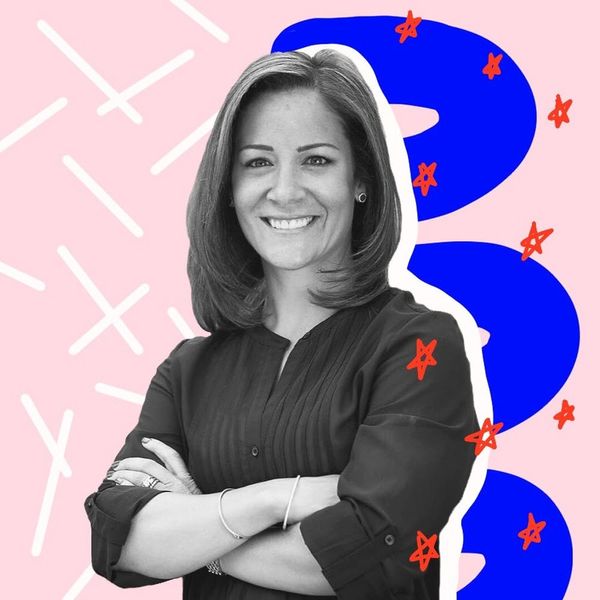 Women Who Run is a series highlighting six female candidates currently running for office. Whether the roles they’re campaigning for are in local, state, or national government, they’re all proof that more women are getting involved in politics than ever before.

It might seem counterintuitive for someone who is busy running a successful small business and raising four young children to want to jump into a political race — but that’s exactly what inspired Kelly Langschultz to run for a spot in the New Jersey state Senate.

After struggling to obtain extra school services for the three of her four young children who suffer from dyslexia, Langschultz, 36, joined her New Milford, New Jersey school district foundation and successfully raised funds for others in similar situations. Though she had no political experience — and considers herself far from a natural politician — Langschultz felt empowered by one person’s ability to make a difference in public service.

She took her proactive attitude to a seat on New Milford council, and now, she’s running as the Republican State Senate candidate in New Jersey’s 38th Legislative District. Langschultz will go up against Democratic incumbent Sen. Bob Gordon, who she says had “lost touch with his community” when she announced her campaign.

“Sometimes, as politicians, you can lose sight of the reasons you decided to do this. You get too busy wrangling and positioning,” she tells us via email. “At the end of the day, voters put you in that office to represent them and make a difference in their lives — not just your party.”

“We’re all trying to make ends meet,” she adds. “If our elected representatives would focus on the real problems at hand, rather than the politics, a lot could be accomplished.”

B+C: Tell us more about the position you’re running for.

Langschultz: I am running to serve in the New Jersey State Senate, representing District 38, which represents 13 municipalities in North Jersey, specifically, parts of Bergen and Passaic Counties. State senators serve two-year terms and focus on state policy impacting the economy, jobs, taxes, education, healthcare, and transportation, among other topics.

Langschultz: I was inspired to run for office because I have been able to see what a real difference you can make in public service. Three of my four young children are dyslexic, which is not a recognized learning disability. My struggles with obtaining services for them prompted me to join the New Milford Education Foundation. Within a short period of time, I became the President of the New Milford Education Foundation, and we were able to coordinate and raise almost $200,000 for our public schools.

In addition to being inspired by my family struggles, I opened my medical billing company when I was 22 years old and created my first job when I was 25. I have experienced firsthand how hard it is to grow your business in the state of New Jersey.

As a millennial, I have a unique profile and a track record of success that has been the driving force behind my State Senate bid. I’m a mother of four, a wife of a union worker, a sister to a paid firefighter, a Division I athlete [in soccer at Drexel University], a small business owner, a homeowner, a commercial property owner, a New Milford Councilwoman and a child advocate.

B+C: How has running your own small business for over a decade prepared you for a career in politics?

Langschultz: I have learned how to listen and create solutions and policies based on constructive criticism. Truthfully, the political climate is very negative, and it has been tough to pierce this barrier with residents when trying to discuss what is most important to them within the state. But my business experience, as well as my will to serve the interests of my district, has provided me with the ability to cross party lines and create bipartisan solutions.

Langschultz: I think the most frustrating thing is, well, politics. I am not a natural-born politician, and I didn’t decide to run for office to become a politician. I ran to govern, to make positive changes to my town, and now my state. I think that leads into what I find most rewarding — that you can be a change maker. You really can make a difference in the lives of those you represent.

Langschultz: My platform is made up of three key components. Property tax stability with an emphasis on viable school funding, small business growth, and social reform, specifically in health care.

Langschultz: The largest difference is that I am not a career politician. I’m motivated by real-life experiences in how difficult it is to make it in this state, and I have grown from it. I plan to use those experiences to effectuate positive legislation that takes into account the unintended consequences that weigh down the constituents in the district as well as in our state.

B+C: You do seem to be very active in going door to door to speak with people. Why is this important and what is the most surprising thing you’ve learned in speaking with people?

Langschultz: Going door-to-door has been one of the most rewarding parts of the campaign because I’ve been able to speak with so many families about their struggles and what they would like to see done on a state level. In order to be an effective representative of your district, I think it’s critical to actually listen to the people of your district. The most surprising thing I’ve learned is how many people share the same concerns: affordability; good paying jobs; quality education for their children.

B+C: Do you think having more working moms like yourself in political office could help other women see it as a viable option for them?

Langschultz: I think it’s become increasingly clear that it is absolutely critical for women to get involved in politics. We make up a significant part of the population; we are business owners, professionals, homemakers, wives, mothers. We have a stake in how things run and the decisions that are made. And our ideas have a place and an inherent value in government. Fortunately, I think we’re seeing that in the rise of women that are running for office, and I’m positive that that will continue both statewide and nationally.

When I decided to run for council at 35, with four kids, a husband, and a business, I had a lot of doubters. A lot of people told me it wasn’t the right time or it was a bad idea, or that I was going to lose — and then I won. I’m hoping that my example shows that it can be done. That you do have time, or you can make the time, and that odds aren’t as against you as people, or even you, may think.

B+C: What advice would you give other young women who want to make a difference, but don’t know how to get involved?

Langschultz: Just do it. Truthfully, it’s as simple as that. If there is an issue, an organization, or a movement that you are passionate about, get involved. You can make a difference. It’s more important than ever to get involved and make your voice heard. In doing so, you lend your voice, and more importantly your time, to a movement. If this past election cycle showed us anything, it’s that when a movement catches steam, there is no stopping it.

Langschultz: Voters can support my campaign by going to KellyLangschultz.com to find out more about my platform and sign up to volunteer or donate. You can also follow our daily updates on Facebook. The election takes place on November 7, 2017.