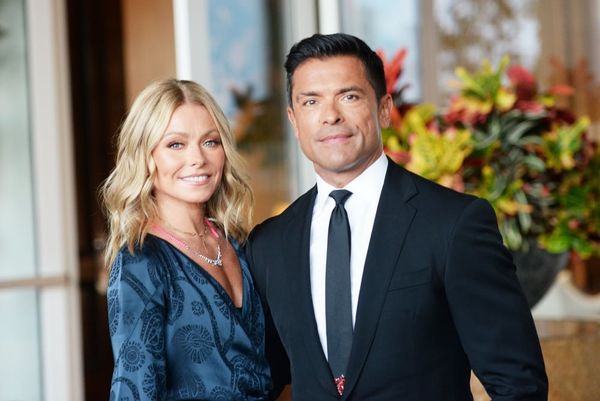 Riverdale season 3 still has plenty more drama in store — including a guest appearance by none other than Kelly Ripa, who will appear alongside her IRL husband, Mark Consuelos.

“It’s a family affair,” Ripa wrote on Instagram on Tuesday, November 6, announcing her upcoming role. The moody photo she shared showed her sitting in a leather armchair and wearing a sparkly black-and-gold minidress and black stilettos.

She went on to share that she would be playing Hiram’s mistress on the show, joking, “23 years of auditioning for a role I was born to play.” Hiram Lodge — Veronica’s father — is played, of course, by Consuelos on the CW teen drama. He’s married to Hermione Lodge, but their marriage is not without its problems (to say the least).

According to ET, Ripa’s character is Mrs. Mulwray, who is described as “confident and tough… she’s a beautiful, icy, femme fatale who gets caught up in a conspiracy that’s much bigger than she initially realized.”

Although Ripa is best known now as a daytime talk show host on Live With Kelly and Ryan, her TV roots are planted firmly in dramatic acting — she and Consuelos met on the set of the long-running ABC soap opera All My Children, on which Ripa appeared for over 10 years, and eloped in 1996. Their fun-loving and enduring relationship is often the subject of headlines, as the two share their family adventures and even go to bat for each other when needed on social media.

Ripa is not the only family member set to join Consuelos on the show, either: It was previously announced that the couple’s eldest child, Michael, would play a younger version of his dad’s character in the flashback episode titled “The Midnight Club,” set to air on Wednesday, November 7.

Will you be watching for Kelly Ripa’s upcoming Riverdale role? Let us know @BritandCo!