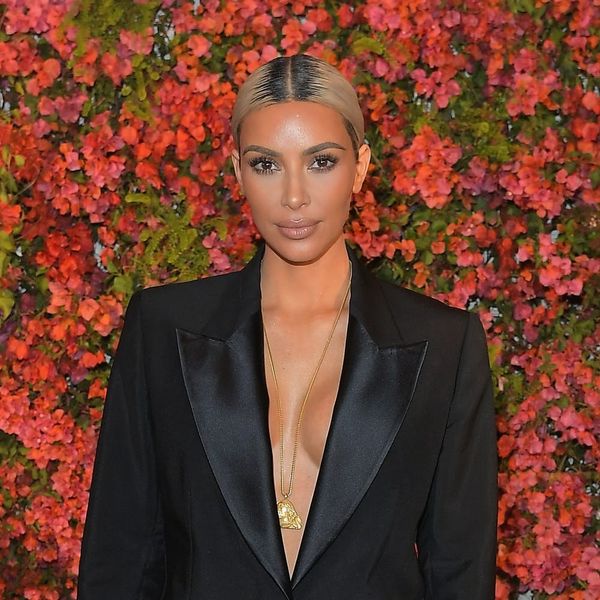 Over the weekend, Kim Kardashian confirmed that baby No. 3 is on the way by hosting a lavish, cherry blossom-themed baby shower. Her sisters and mom Kris Jenner were in attendance, as were pals Chrissy Teigen and Jen Atkin, but one VIP was absent: her surrogate.

“I, um, I did not [invite the surrogate],” the 37-year-old shared during an appearance on The Real earlier today. She then explained that the woman (who has not been identified publicly) was there before the party. “I did introduce her to my family. I introduced her to my family earlier that day.”

As for why she didn’t ask the surrogate to stick around for the baby shower, the mom of one-year-old Saint and four-year-old North said, “Of course I would’ve wanted her to be there and be a part of it, but I hadn’t really gone that far in explaining it to my kids yet. So I have to figure that out first before they really see [the surrogate], and then if we’re celebrating, you know, her, I just want to celebrate the baby. I think I have to explain it to my kids first and figure out how I’m going to explain it to them.”

Kardashian stressed, though, that there are no hard feelings between her and the woman carrying her child. “I love her. I have the best relationship with my surrogate,” the reality star gushed. “She’s so nice. She is the perfect person to do this for my family.”

She went on to give a little more insight into the process that she and husband, Kanye West, are navigating, revealing that while prospective parents can “do it totally anonymously,” they wanted an arrangement that was more open.

“I just felt like I wanted whoever’s carrying my baby, like, what if they weren’t a fan of me or my husband and what if they didn’t want to be carrying our baby? I wanted to give them that choice and be, like, proud and on the same page,” Kardashian explained. “I wanted a relationship with her.”

She also said that when the surrogate — who is “someone that had watched the show… [and] seen my struggle and seen how open I was about it” — found out she was dealing with the famous couple, “she was really proud to do it and really excited.”

According to E! News, Kardashian also said that when it came to using a surrogate to have another child, she “really didn’t have a choice” because of her past pregnancy complications. “I, at this point, couldn’t get pregnant and we wanted to expand our family. So the fact that that is something that you can do, and it’s really taboo to talk about and people don’t really understand it, I mean, even throwing my baby shower, do I [have] a baby shower? What do I do? I thought I wanted to because I wanted North to experience a party, like, ‘Something’s coming, someone’s coming. We’re going to welcome our little sister coming.’ So I think that… really, like, got everyone in the mood.”

She continued: “But there are no rules. It’s like, you know, I saw online people were saying today, like, ‘Did you invite your surrogate to the shower? Is she invited?’ What are the rules? There are no rules and I’m trying to figure it out.”

That’s why she wasn’t sure she should throw a party at all. “I was in the mindset of, ‘I’m not going to do a baby shower. And all of a sudden, like five days before the baby shower, I was like, ‘I have to do it.’ Cherry blossoms, it’s what I wanted. We had to rent off these cherry blossoms. They pulled it off in four or five days… and it was so beautiful and it was just a tea for my friends and it was beautiful. I’m so glad that I did it.”

What do you think about that fact that Kim Kardashian didn’t invite her surrogate to the baby shower? Let us know @BritandCo.