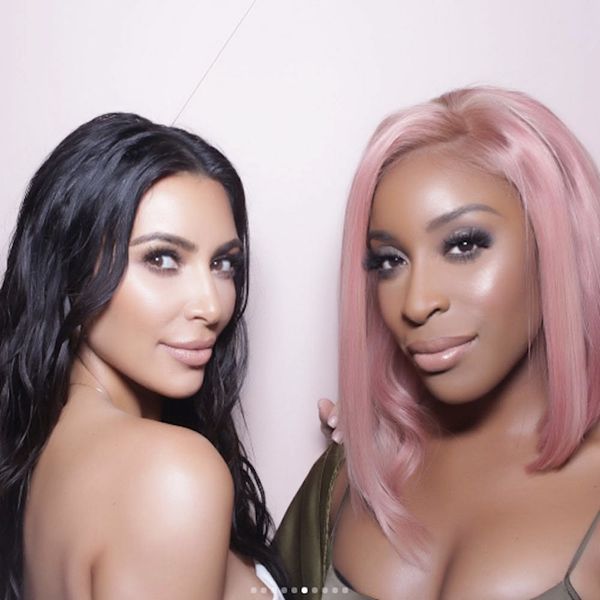 Kim Kardashian West’s Crème Contour and Highlight Kits ($48) launched last week, and already they’ve been at the center of plenty of drama. Not only did the Keeping Up With the Kardashians star face accusations of blackface in the line’s promo photos, but fans also called her out for allegedly shading beauty vlogger Jackie Aina in her recent Instagram.

The popular vlogger reviewed Kardashian West’s line on YouTube, and let’s just say, she wasn’t blown away. Aina was honest about her disappointment at the size of the product and the steep learning curve for mastering the product. She also scoffed at the $48 price tag, questioning if it was really worth $50 plus after shipping.

Thank you to everyone who came out to my @kkwbeauty launch event! Loved seeing my OG's & meeting so many new people!

It was that mixed review that had fans thinking Kardashian West may have intentionally snubbed Aina at the brand’s Bel-Air launch. Kardashian posted a series of photos of herself with guests to thank them for attending; Aina’s pic was mysteriously missing a tag.

Adding fuel to the shade flame was Aina herself, who claimed that the entrepreneur intentionally left her name out of the photo. “She knew what she was doing,” she told fans in an Instagram live. “I didn’t glorify the product in my review, but I also didn’t bash it.”

Kardashian West has since taken to Twitter to clear the air, explaining that it was merely an accident, and that Instagram wouldn’t allow her to tag Aina once the photo had been posted.

I just saw a story saying I intentionally didn’t tag @jackieaina in a pic I posted on Instagram because of a review she did about my line.

I would never post someone’s pic on my page and then intentionally not tag them.

When I uploaded the album I was tagging everyone that came to the party and for some reason it wouldn’t let me tag Jackie’s name.

I hung out with @jackieaina in my home and she was super sweet!!

I love that she has an opinion and I’ll take what she said and use it to better my products.

Honestly, I’m so thankful to everyone who is giving me feedback on my beauty products & I love hearing what everyone loves, and doesn’t love

So @Instagram, can you change it so that you can tag people in galleries after they are posted, so I can avoid this issue in the future?

Aina, for one, seems to be satisfied with the explanation: She’s since tweeted her back to say that all is well.

So when this happened I was confused. It wasnt about being recognized, it felt like I was being shaded for a less than perfect review https://t.co/bldIVd1Vi0

I don't know @KimKardashian personally, so while she was super sweet tbh it's hard NOT to assume the worst of people in this industry 😩

but anywho thank you @KimKardashian for clearing that up, having me into your home and welcoming my honesty and feedback ❤️

Guess that’s one case of shade shut down!

Do you buy Kim’s explanation? Tell us why or why not @BritandCo.

Nicole Briese
Nicole is the weekend editor for Brit + Co who loves bringing you all the latest buzz. When she's not busy typing away into the wee hours, you can usually find her canoodling with her fur babies, rooting around in a bookstore, or rocking out at a concert of some sort (Guns N' Roses forever!). Check out all her latest musings and past work at nicolebjean.com.
Beauty Products
Beauty News
Beauty Products Controversy Kardashians twitter
More From Beauty News