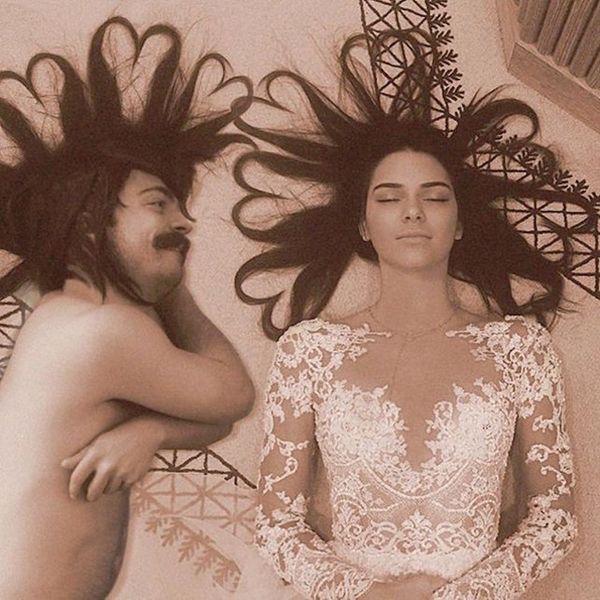 When it comes to pop culture in the US, there really is no family dominating the sphere more so than the Kardashian-Jenners. Every other day, there’s something hitting the headlines about Khloe Kardashian’s new workout show or the famous family’s latest holiday card. Yep, the Kardashian-Jenners are pretty much everywhere and it certainly feels like they all get plenty of screen time. But guess what? There’s a Kardashian-Jenner that they haven’t told you about (and no, we’re not talking about Rob).

His name is Kirby Jenner and according to his Instagram bio, he is an “Amatuer Model / Lover of all things / Fraternal Twin of Kendall Jenner.” As evidenced by his Instagram account, Kirby really likes to tag along on his “twin sister’s” IG posts — it’s just too bad that he’s cropped out of most of them. (LOLOLOL) And despite only 24 posts, he’s also already got 78.8 thousand followers on the social media platform. The mustachioed comic told Daily Mail that despite his persona Kirby’s newfound fame, he’s really just “a fun dude, livin’ life one day at a time.”

He actually — dare we say it — improves several of Kendall’s iconic photos by simply being in them. Kendall’s heart hair pic might have picked up 3.4 million likes and currently ranks as the most liked photo in on Instagram (still), but we personally think the one with Kirby in it really deserves 3.5 million likes.

Here he is hanging with sisters Khloe and Kendall on a boat in St. Barths… except he’s going overboard.

Oh, you might not have caught him on Kendall’s Calvin Klein billboard hocking underwear. We know, it’s easy to miss these things.

And here are the “twins” celebrating their 17th birthday. I guess it’s easy to see who’s the favorite.

But jokes aside, the most impressive thing about Kirby Jenner is his photoshopping abilities.

Kimberly Wang
Kimberly Wang writes about all things pop culture, tech, style, and beauty. She's a Bay Area transplant and has an MFA in Creative Writing from Columbia University. On a sunny New York day, you can find her hanging out with her mini schnauzer Isabelle Jellybean on a blanket in Central Park.
Kardashians
Pop Culture
Kardashians
More From Pop Culture