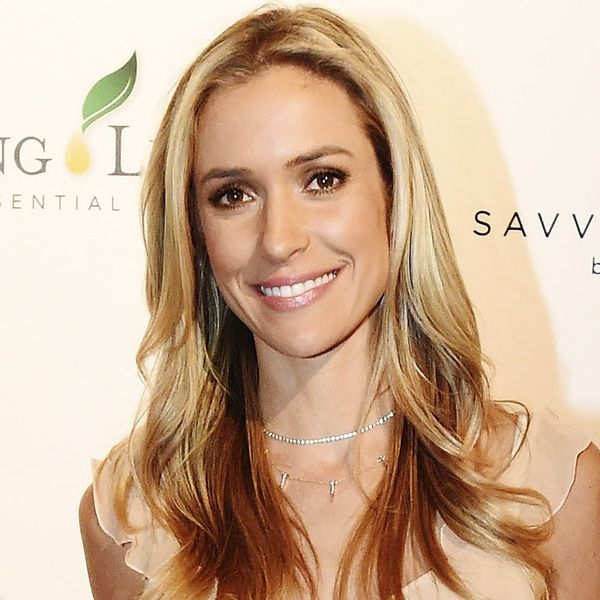 Rapunzel tresses, be gone! Kristin Cavallari is back to living that lob life once more. The mother of three, who’s been steady growing out her locks for some time now (we last saw her with a shorter ‘do in 2015), had a sudden itch to chop it all off, and stylist Riawna Capri was all too ready to comply.

Taking to Instagram stories, the 30-year-old documented her hair transformation, from the moment Capri makes the cut to the aftermath of her bold decision. “Doing it!” she writes in the first shot, making a silly face as the hair guru (who just so happens to be the same mastermind behind Julianne Hough’s 10-minute post-wedding hair change) takes the scissors to her hair.

As we can see from her post-cut snap, it’s a good few inches she’s lopped off her ends, shortening her up just to the shoulder.

The fashion designer wasted no time in showing off her new look, heading straight into a photoshoot for her jewelry line, Uncommon James, just an hour later, as her stylist revealed in her own Instagram post. “Great choice Kris, because now your middle name is just “sex,” she wrote.

New Shorter Doo for @kristincavallari ✂️ an hour before she shoots for @uncommonjames !!! Great choice kris, because now your middle name is just 'sex' 😂😂😂 Looking good babe, Thank You for trusting me with the chop 😘 (GLAM :💄 @ash_kholm , 📸 @dennisleupold , 👗 @danigerous , 💇🏼 #meereecapri & @laurenburke901 ) check my story for a little bit more 😘

Cavallari also showed off the look on her page with a few sneak-peek shots, writing “Chop chop,” in one pic, with “Short hair don’t care,” as the caption for another.

While we loved her long ‘do, we’ve gotta say: Shorter hair really suits the reality alum, giving her an edge that has us flashing back to her sassy The Hills days of yore. In short? We love it.

What do you think of Kristin’s new look? Tell us over @BritandCo.

Nicole Briese
Nicole is the weekend editor for Brit + Co who loves bringing you all the latest buzz. When she's not busy typing away into the wee hours, you can usually find her canoodling with her fur babies, rooting around in a bookstore, or rocking out at a concert of some sort (Guns N' Roses forever!). Check out all her latest musings and past work at nicolebjean.com.
Celebrity Hair
Hair
Celebrity Hair Haircuts
More From Hair