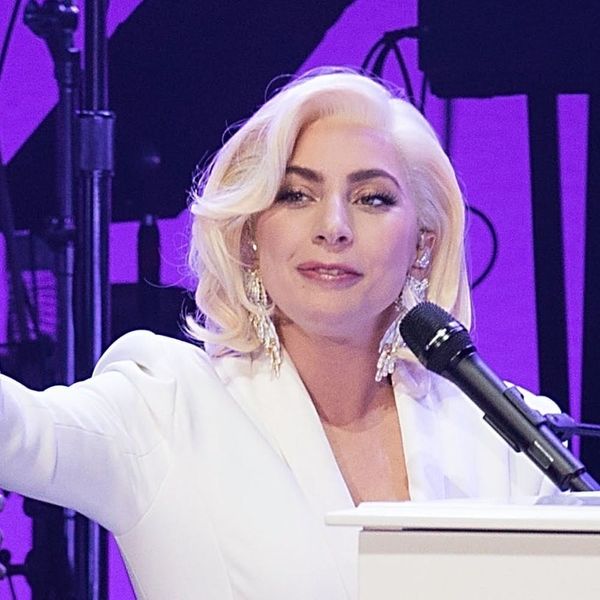 What’s in a name? Well, if you’re Lady Gaga, quite a bit, actually! Though rumors have been swirling as of late that the“Million Reasons” singer would be making moves to distance herself from her long-held stage name, Mother Monster is speaking out to set the record straight.

Talk of a possible moniker swap first came about last week when Entertainment Weekly noted that Gaga’s role in her upcoming movie, A Star Is Born, is “credited by her real name, Stefani Germanotta.” While this (supposed) choice might have shocked fans, InStyle gave a reasonable possible argument for the decision, saying that it “makes sense that Gaga — sorry, Stefani — would try to distance herself as an actress from the (literal) name she’s made as a singer.”

An exclusive new look at #BradleyCooper's directorial debut, #AStarIsBorn, is here.✨The remake, also starring #LadyGaga, is a full-bodied take on one of the most oft-made films in the Hollywood canon. "[We’re exploring] what unconditional love is, how hard it is to love someone in this world as a human being, and what that demands," Cooper said of the film. Click the link in our bio to see our full conversation with Cooper. 📷: Neal Preston/Warner Bros.

A post shared by Entertainment Weekly (@entertainmentweekly) on Dec 6, 2017 at 8:15am PST

According to the performer, however, it’s just not so, with Gaga stepping in to clear things up for herself. Taking to Twitter, the 31-year-old told her followers directly, “I’ve seen a lot of rumors on the internet that for A Star Is Born I’ll be billed as Stefani, but that’s not the case. It’s Lady Gaga, baby! 💞”

I’ve seen a lot of rumors on the internet that for “A Star Is Born” I’ll be billed as Stefani, but that’s not the case. It’s Lady Gaga, baby! 💞

Fans were certainly glad to hear it, replying with sentiments like, “Omg yes we want gaga back for LG6” and “Gaga for ever! Can’t wait to see the movie!! 💕” (though some noted that a rose by any other name would still smell as sweet:“STEFANI, JOANNE, LADY GAGA, ANY NAME YOU PREFER, I’LL LOVE YOU ENDLESSLY,” one wrote.

Set to be released on May 18, 2018, A Star Is Born will be Gaga’s first starring role in a feature film and follows her Golden Globe-winning performance in American Horror Story: Hotel.

According to Cooper, who spoke to EW about the remake, the new film “all comes down to this broken love story.” Playing an aging, alcoholic performer who helps a rising star attempt to reach her dreams, the actor (who also made his directorial debut on the film) says, “[We’re asking]: What happens when you’re 30 and the idea that ‘Maybe I’m not going to make it’ has crept into your artistic brain? There’s no better way to express that than through singing because there’s nowhere to hide when you’re singing.”

We can’t wait to see her credits up on the big screen!

Do you think Lady Gaga should drop her stage name? Let us know @BritandCo!

Desiree O
Desirée O is a ‘Professional Bohemian’ who loves anything and everything related to the arts, entertainment, and pop culture. She ADORES being a ‘Newsy’ for Brit + Co, covering all of the latest tidbits of awesomeness that you want to read about. When she’s not writing, she’s either making messy art, going on long adventurous walks with her camera, or poking around over at bohemianizm (http://www.bohemianizm.com/). You can find out about Desirée O and her work at http://DesireeO.com/ or follow her on Twitter @DesireeO.
Celebrities
Celebrity News
Celebrities Movies
More From Celebrity News