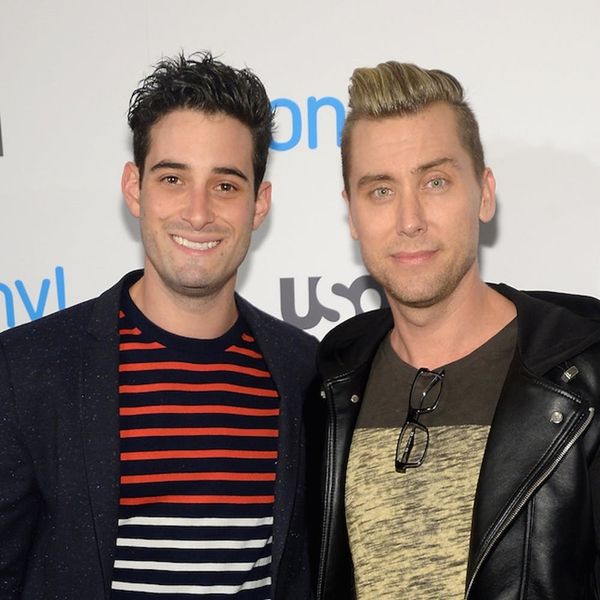 One year ago today, former boybander/Topanga’s prom date Lance Bass and his painter husband Michael Turchin got married in a star-studded wedding in at the Park Plaza Hotel in Los Angeles (FYI, their wedding rings are gorg). His fellow ‘NSYNC members were all there, minus Silas’s dad JT who was still in the midst of his 20/20 Experience world tour. Though the star/wannabe astronaut never made it out to space (back in 2007, the celeb completed astronaut training in a bid to visit the Russian space station, but that sadly fell through), he is still over the moon about his husband of one year.

The gushing husband posted this absolutely adorable animated flip book video along with the caption, “Happy 1 year anniversary to the love of my life @michaelturchinart!!! I want to relive that night over and over again!” The animation tells his and his husband’s love story in just 15 short seconds. It is doubly cute because it’s their one year, which — if tradition is your thing — you know is the paper anniversary, hence Lance’s celebrating by putting their love on PAPER. *cue the awwws*

The book is from The Flippist, a site that will create hand-drawn flip books for you, but it’s also something that you can totally do yourself with some colored pencils, a marker and a flippable notebook. Sure, it might be time consuming, but the results are so worth it.

Happy anniversary to Michael and Lance!

Kimberly Wang
Kimberly Wang writes about all things pop culture, tech, style, and beauty. She's a Bay Area transplant and has an MFA in Creative Writing from Columbia University. On a sunny New York day, you can find her hanging out with her mini schnauzer Isabelle Jellybean on a blanket in Central Park.
Celebrity Wedding
Celebrity News
Celebrity Wedding