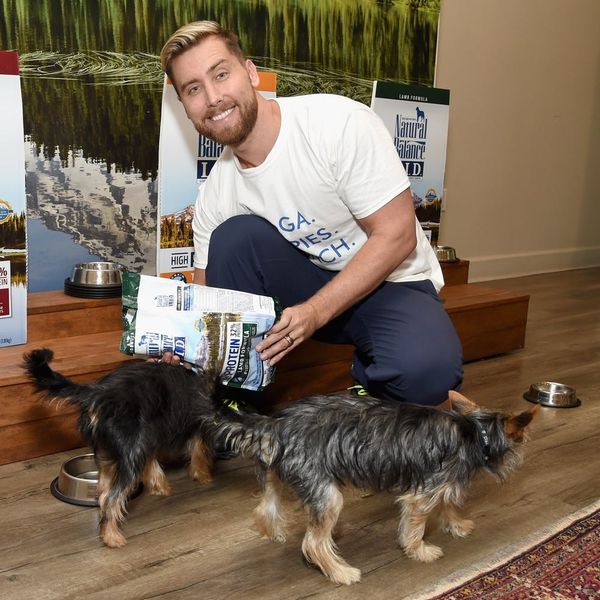 Today is National Dog Day, but for Lance Bass, his husband, Michael Turchin, and their three pups, Lily, Chip, and Dale, EVERY day is national dog day. “Every day is basically their birthday,” Bass told us over the phone.

He isn’t kidding — rather than simply taking them for a walk or to play fetch in the park, the former boy bander keeps it fresh, going on regular hikes and setting up puzzles for his pups to solve with their meals. Just this week, in fact, the singer hosted a bark-worthy session of doggy yoga, or Doga, with his four-legged buddy Chip for the release of Natural Balance’s new High-Protein Beef Formula — Bass’s dog food of choice.

“I didn’t think my dogs would be able to do a yoga class,” he admits. “They’re pretty antsy. Some of them started barking, [but] Chip was a natural. He did everything I needed him to do.”

I think I'll heal very nicely with these two as my nurses. I'm home safe and sound. Thank you all so much for the well wishes. You guys are the sweetest. Love you all. ❤❤❤❤❤❤❤❤❤❤❤❤❤

Bass’s pets are also a big help to him off the yoga mat — when he had to have his appendix removed this past February, Chip and Dale were right there by his side, despite the fact that he had adopted them from Real Housewives of Beverly Hills star Lisa Vanderpump’s Dog Foundation just two weeks prior. ‘It’s so funny how dogs sense these things,” he shared. “They knew something was wrong with only knowing me two weeks. [They laid] right next to my stomach.”

The quality time spent with his pups is a luxury the 38-year-old is enjoying after years of being on the go. “I’ve been a very busy boy since I was 16,” he says, laughing. “The older I get, [I take] more time for myself.” Where he was once hitting stage after stage to croon “Bye, Bye, Bye” for legions of adoring fans, he’s now running his production company from home, getting involved in the food space with Chef’d, and… building birdhouses? “We’re pretty crafty,” Bass explains. “We build swing-sets in the backyard. … ‘[I build] birdhouses and [paint them]. … It’s fun.”

But is there room in the schedule for, say, a reunion tour? “[Not] that I know of,” he says slyly. He does concede that the guys may need to get together for ANOTHER kind of reunion, though: a puppy play date! It may prove difficult, as his former bandmates are “always in different places,” but Bass says he’s *so* on board. “[We] definitely need to make that happen.” Uh, yes, please!

He already has the playlist figured out: “They really love blues music,” he shared of his dogs. “[They get] so excited when they hear that.”

Have you ever tried Doga? Let us know over @BritandCo.

Nicole Briese
Nicole is the weekend editor for Brit + Co who loves bringing you all the latest buzz. When she's not busy typing away into the wee hours, you can usually find her canoodling with her fur babies, rooting around in a bookstore, or rocking out at a concert of some sort (Guns N' Roses forever!). Check out all her latest musings and past work at nicolebjean.com.
Dogs
Celebrity News
Dogs Music