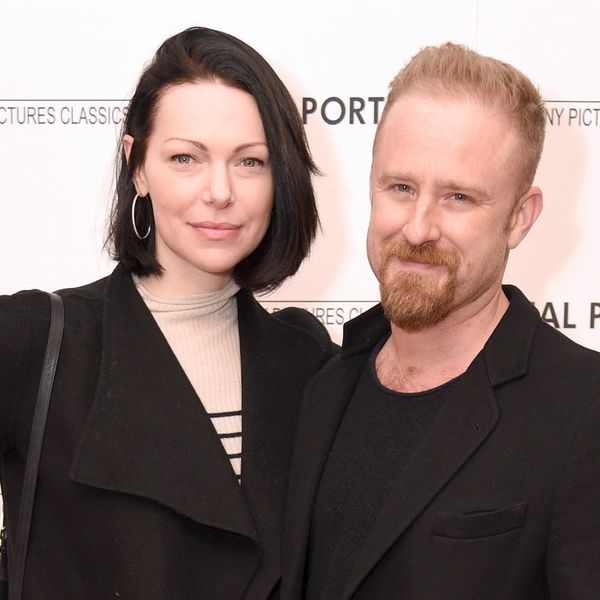 Laura Prepon and Ben Foster have made it official! The actors, who have been together for roughly two years, said their “I Dos” today at an undisclosed location.

The OITNB star confirmed the news via social media, posting what appeared to be an old-timey shot of herself and her new husband from their nuptials. “Just married!,” she wrote. “Thank you for all the love and support. Wishing all of us the good stuff.”

While much of her dress was covered by her bouquet, it appeared to be a simple, yet elegant, sleeveless design with a plunging V-neck. Foster also made a lasting style impression in a white shirt and tie, a vest, and a hat with a grosgrain ribbon. The sweetest of all, however, were the matching expressions of pure love both wore on their faces.

Details about the ceremony are few, but the actress told E! back in January of last year that she wanted a small wedding. She also took the opportunity to gush about her then-fiancé, quipping, “I’m happy. It’s amazing. He’s the love of my life.”

The pair surprised everyone — Prepon’s former co-star Ashton Kutcher included — with their October 2016 engagement. They welcomed a baby girl named Ella back in August.

Here’s to wishing them the very best on their big day!

What do you think of Laura’s wedding day look? Share over @BritandCo.

Nicole Briese
Nicole is the weekend editor for Brit + Co who loves bringing you all the latest buzz. When she's not busy typing away into the wee hours, you can usually find her canoodling with her fur babies, rooting around in a bookstore, or rocking out at a concert of some sort (Guns N' Roses forever!). Check out all her latest musings and past work at nicolebjean.com.
Celebrities
Celebrity News
Celebrities Celebrity Couples Celebrity Wedding Love Weddings
More From Celebrity News