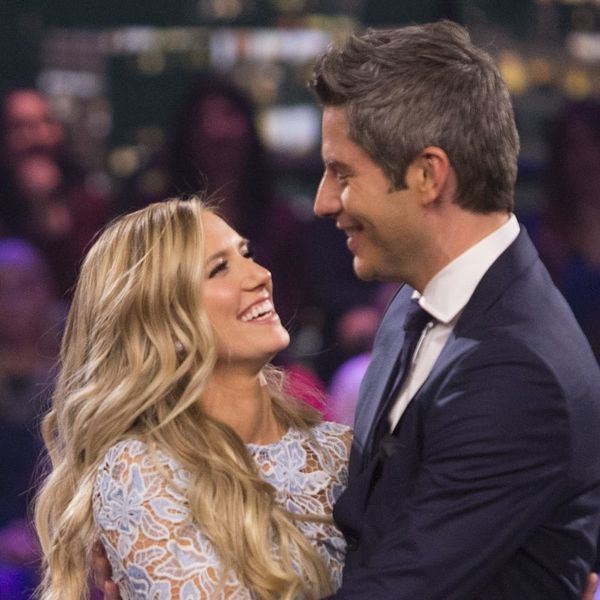 It’s been a whirlwind 48 hours for fans of The Bachelor. Not only did we see Arie Luyendyk Jr. propose to — and then break up with — new Bachelorette Becca Kufrin, we were privy to a second proposal when the real estate agent got down on one knee to pop the question to his runner-up, Lauren Burnham on the show’s follow-up special.

We got a good glimpse at the 3.6 carat rockThe Bachelor gifted his love last night when the couple appeared on Jimmy Kimmel Live post-show, and the style couldn’t have been more different from the one he chose for his ex.

Featuring a cushion-cut center diamond and more than 170 smaller diamonds on the surrounding band, Lane told People that it was, in fact, “…one of the most highly decorated rings I’ve ever done.”

Though the jeweler presented Luyendyk Jr. with several other options for Burnham following his breakup with Kufrin, it was that same original piece that he wound up coming back to.

“It’s really a ‘wow’ ring — and for everyone involved, this whole season has been a ‘wow’ experience,” Lane concluded.

What do you think of Lauren’s bling? Share with us over @BritandCo.

Nicole Briese
Nicole is the weekend editor for Brit + Co who loves bringing you all the latest buzz. When she's not busy typing away into the wee hours, you can usually find her canoodling with her fur babies, rooting around in a bookstore, or rocking out at a concert of some sort (Guns N' Roses forever!). Check out all her latest musings and past work at nicolebjean.com.
Celebrity Engagement
Wedding Style
Celebrity Engagement Engagement Engagement Rings the bachelor
More From Wedding Style