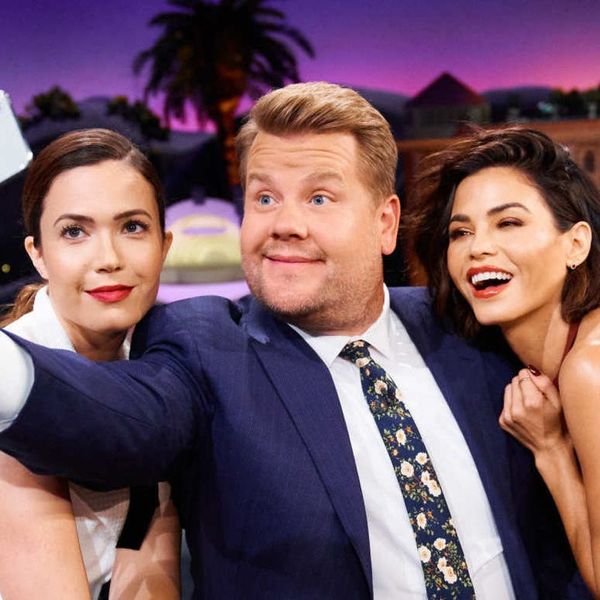 Do you remember how you met every one of your friends? Singer-turned-actress Mandy Moore and dancer-turned-actress Jenna Dewan, who’ve been friends for almost two decades, have a little known single from Moore’s first album to thank for their initial meeting.

During an appearance on Monday night’s The Late Late Show With James Corden, the This Is Us star explained how she first connected with the future Step Up star. “It was a song called ‘So Real’ that was like a single in Australia or something,” Moore recalled. “But Jenna, obviously, is the most amazing dancer, and she was a dancer in the video!”

Dewan explained that for her, starring in a Mandy Moore video was the hugest deal in the world at the time. “I called my family,” she told Corden. “I was like, ‘I’m doing a Mandy Moore video.’ It was this huge production. I was just overly excited.”

The video shows Moore writing in her journal in a field during the day before switching to a magical night scene complete with very ‘90s hair and makeup and a set of backup dancers. Dewan’s appearance is brief, but she gave the performance her all — which may have been too much. “I danced way too hard the entire time,” she joked.

Of course, Moore isn’t the only celeb that 37-year-old Dewan danced with back in the day. A few years after her “So Real” encounter, she performed with legend Janet Jackson in a moment she got to recreate earlier this year at the Hollywood Bowl.

“She asked all of her, what she calls ‘legacy dancers,’ all of her old dancers to come back and do ‘Rhythm Nation,‘” Dewan explained. “It’s like the best high school reunion.”

Speaking of high school, Corden pointed out that both Dewan and Moore were cheerleaders when they were younger. Naturally, he had some throwback photos on hand — which inspired Moore to get up and demonstrate one of her old routines. Watch the video below, and see Corden attempt some of Janet Jackson’s moves in the clip above!

Do you remember Mandy Moore’s “So Real”? Let us know @BritandCo!

Kat Armstrong
Kat has been a writer, social media maven and mom for longer than she's willing to admit. She's also spent time in front of and behind the camera, interviewing celebs, politicians and acting as a producer for fashion and artistic photography shoots. When she isn't writing for various orgs and publications, she's hanging with her kids, husband and French Bulldog, Peter, in Toronto, Canada.
Music
Music
Music TV
More From Music