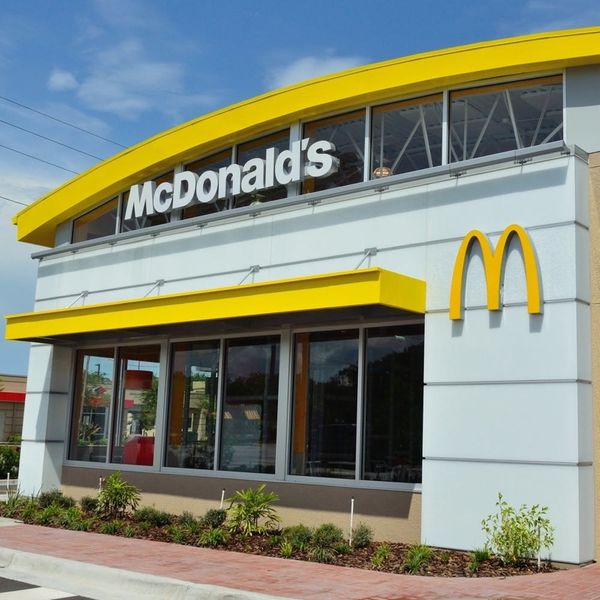 When you think of McDonald’s, you usually think of those insanely addictive French fries and their seasonal drinks. But the latest buzz about the fast food joint isn’t about food at all. Instead, Mickey D’s is trending thanks to the backlash of the company’s new uniforms.

McDonald’s colors have been red and yellow for as long as we can remember, and you’d think the revamped uniforms would be some combination of those hues. But instead, the corporation settled for a very understated all-gray ensemble created by designers Bindu Rivas and Waraire Boswell.

And of course, Twitter has some *ideas* about it — namely, that the outfits have a distinctly dystopian look to them. They’re even drawing comparisons to the First Order from The Force Awakens and the peacekeepers from The Hunger Games (LOL).

Hey @McDonalds . About your new uniforms. Did you get your inspiration from the First Order? pic.twitter.com/uk6iIFZz74

@McDonalds it's a wonderful uniform, in doublespeak, in 1984…

What do you think of the new McDonalds uniforms, designed by the resident Death Star uniform person pic.twitter.com/fnyQzLquAy

Others are skipping the pop culture references altogether and just expressing their displeasure.

new mcdonalds uniforms are no bueno

As a former wearer of a McDonald's uniform,I think the new ones look great!Granted burlap would have felt better on the skin @McDonalds

With all the backlash McDonald’s wardrobe choice is getting, one thing is clear: People love color.

What do you think of the new uniforms? Tweet us @BritandCo!

Shea Lignitz
Shea can be found in the nearest bookstore or brewery, exploring the great outdoors, or blasting Led Zeppelin. She grew up in the cold and rain of Northern California's redwoods but is currently wandering around Texas.
Controversy
Style News
Controversy Fast Food
More From Style News