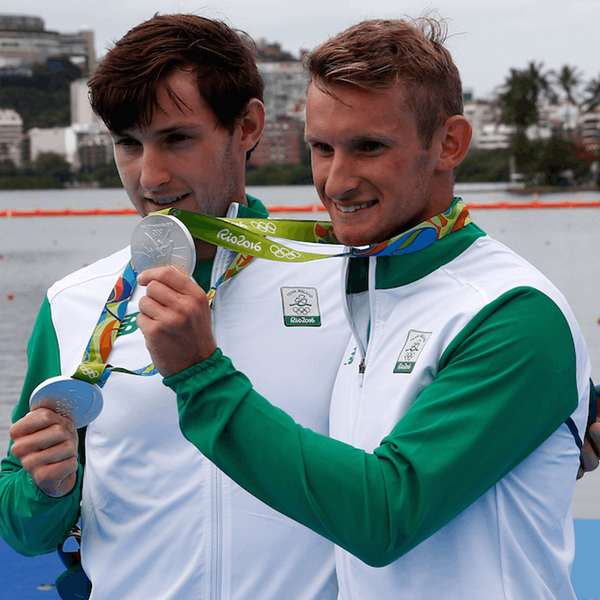 We LOVE a great sibling pairing: you know, like napping dad Chris Hemsworth and his brother Liam! Or Bella and Gigi Hadid.

Yet halfway through the race, Paul and Gary (who were in fifth place at the time), made history when, like something out of a Hollywood movie, the brothers began to inch their way up through the pack. Finishing the race in six minutes and 31.23 seconds, they ended up with silver medals, standing on the podium next to French gold medalists Jeremie Azou and Pierre Houin, who beat them by all of 0.53 seconds. Wow!

As their native Ireland celebrated their momentous win, Paul and Gary took time to chat with Irish news channel RTE, winning the hearts of the world in the process. The pair’s goofy sense of humor made quite an impact and soon, social media was abuzz with their two-minute gem of an interview. NBC Sports podcast producer Tess Quinlan even went as far as to proclaim that, “If you don’t laugh, you have no soul.”

#IRE O'Donovan brothers own the interview podium. If you don't laugh, you have no soul. https://t.co/fn5PyDZwYN

Thankfully, laughing with these two really isn’t all that hard. The news-making interview started with Gary assuring the Irish host that “the background might look superimposed, but it’s very real,” and soon became even more wonderfully strange.

Other highlights include the brothers sharing their excitement about putting on their “podium pants” and Paul revealing the realities of taking part in drug-testing procedures (“I was there for an hour or two trying to take a pee in a cup”).

Perhaps the best part of all, however, was the insight Gary offered into an Olympic champion’s mouth-watering diet: “We had a bread roll and some Nutella.” Thankfully, pizza was on the way!

You can watch Paul and Gary’s full interview below, although you mayyyy need to replay it a couple of times to decipher their thick accents (which, it must be said, only adds to their charm).

Are you amused by Paul and Gary’s interview antics? Tweet us @BritandCo.

Barbara Pavone
Barbara Pavone is a pop culture-obsessed writer based in beautiful (but ridiculously cold) Montreal, Canada. When she's not working, she's sipping on a Pimm's Cup and daydreaming about her celebrity hero, Saint West.
Olympics
Celebrity News
Olympics
More From Celebrity News