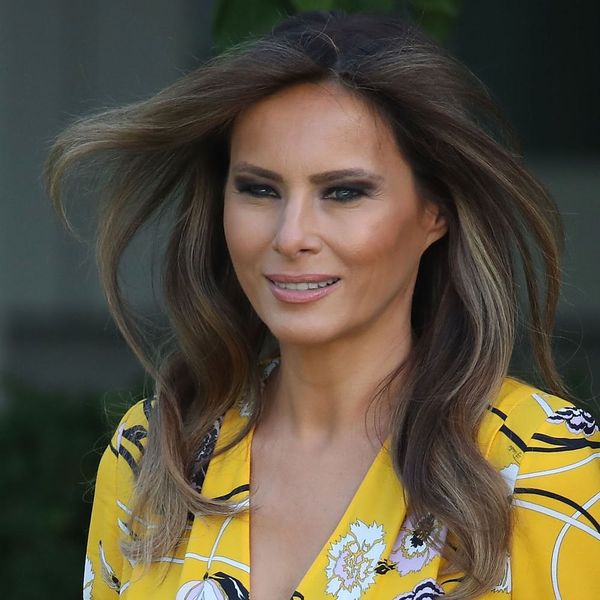 Gingham has been everywhere as of late. Once reserved for picnic throws and retro rockabilly frocks, the checkered print is in the midst of a major style *moment* (just ask its poster-woman Reese Witherspoon). So popular is the summery pattern, in fact, that even First Lady Melania Trump is getting in on the trend, courtesy of her latest public sartorial display.

President Trump’s wife boarded Air Force One with her family on Friday in a red-and-white gingham Altuzzara Wilcox Wrap-Effect Skirt ($895). She paired the streamlined look with a simple, crisp, white V-neck blouse and a pair of matching Christian Louboutin pumps.

While she was missing her dash of blue to round out our flag’s colors, FLOTUS certainly gave us a fashionable take on patriotism, showcasing her Independence Day spirit in the ensemble which could only be described as all-American.

It was a far more casual getup than the one she donned just four days earlier while making an appearance at Treasury Secretary Steven Mnuchin’s wedding in a gauzy, pale pink J. Mendel frock, indicating that she, like the rest of the nation, was gearing up for a little R&R.

What do you think of Melania’s patriotic look? Let us know over @BritandCo.

Nicole Briese
Nicole is the weekend editor for Brit + Co who loves bringing you all the latest buzz. When she's not busy typing away into the wee hours, you can usually find her canoodling with her fur babies, rooting around in a bookstore, or rocking out at a concert of some sort (Guns N' Roses forever!). Check out all her latest musings and past work at nicolebjean.com.
2017 Style Trends
Celeb Style
2017 Style Trends Summer Style