Michelle Obama Wore a Power Pink Dress and It Was Awesome 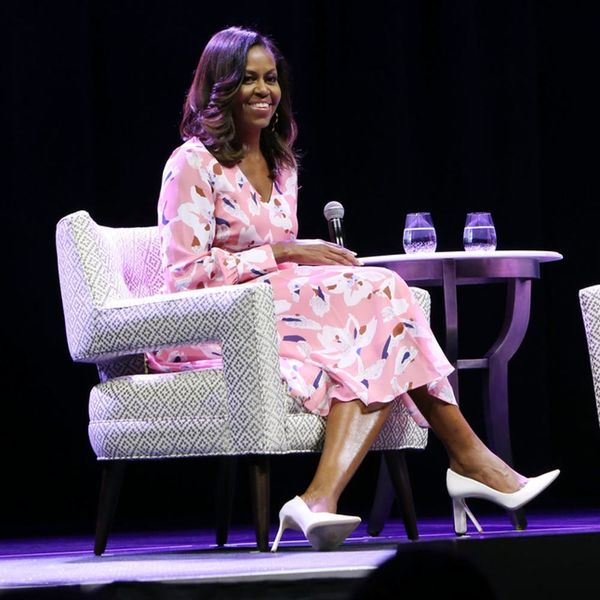 We might not get to see Michelle Obama wearing fancy state dinner gowns on the reg anymore, but luckily for us, the former first lady is still making public appearances. And now that she’s no longer in the White House, she gets to have a little more fun with her looks, like a millennium pink dress she recently wore for a women’s conference that was as fashion-forward as it was statement making.

Earlier this week, Obama spoke at The Women’s Foundation of Colorado’s TogetHER conference, and took the stage in a rosy hued dress that reclaimed the color as powerful, strong, and feminine.

Obama wore the salmon-colored Caro Midi Dress ($575) with white, red and blue floral accents from Tanya Taylor’s pre-fall 2017 collection. (The dress is still in stock, but if it’s anything like her previous looks, it won’t be for long.) She paired it with white Jimmy Choo pumps and Simone Rocha earrings.

While speaking to a crowd of around 8,500 people, Obama addressed the racism she faced while she resided in the White House. “The shards that cut me the deepest were the ones that intended to cut. I felt how they intended,” she said. “Knowing that after eight years of working really hard for this country, there are still people who won’t see me for what I am because of my skin color.” She noted that women endure so much pain, but they don’t let it keep them down. “I am a strong woman because of other strong women,” she said. “You don’t mother alone, you don’t grandparent alone, you don’t struggle alone. You find your community.”

She ended the conversation with a message as powerful as her look, “For underrepresented people to pretend like it doesn’t hurt, it lets those who hurt us off the hook.”

Do you love Michelle Obama’s conference statement look? Tell us your favorite look from the former first lady @BritandCo!

Elyse Roth
Elyse Roth is a freelance writer and editor who is a midwestern transplant in NYC. She loves to explore the city, plus you can find her at a Broadway show or the ballet usually once a week. When she's not finding things to do in New York, she's thinking about where she can travel next. She's combined her love for food and TV into a blog where she makes food eaten on her favorite TV shows at tvdinnerblog.com.
Celebrity Style
Celeb Style
Celebrity Style Politics
More From Celeb Style