Here Is Everything You Need to Know About Microblading 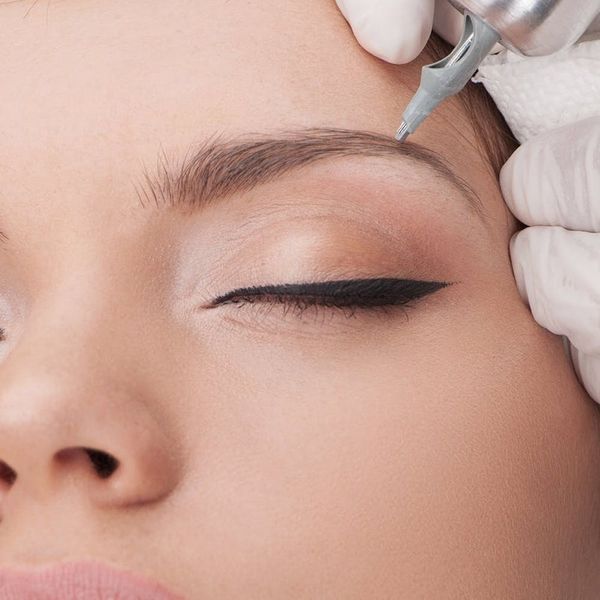 You might be able to thank model/actress Cara Delevigne for the rise in popularity of microblading, but this seemingly magical solution that gets you gorgeously lush, full brows will pique anyone’s interest. As someone who has invested enough money in brow products to put a kid through college (okay, that’s an exaggeration), I was there for it when an offer to try out the procedure arrived in my inbox. My journey to my best brow began at Better Brows NYC in midtown Manhattan, and here’s what I learned having gone under the, err, blade.

This isn’t your grandma’s permanent makeup

Microblading is semi-permanent tattooing for your brows, and because it’s done by hand, the ink is deposited much shallower into your skin, meaning it won’t last forever. This is why you want to make sure you go to a trained, fully certified, and insured technician. Like any time you plan on getting a tattoo, do your research and confirm that you like the work of the artist. Instagram is a great place to find a local business.

The pigment used for microblading isn’t one size fits all, either. Kendra, the owner of Better Brows, hand-mixed the shade that would best complement my skin tone and match my hair.

Getting the shape right takes awhile

During my first appointment, Kendra spent nearly two-thirds of the time plotting out my new brow shape. A good technician will spend a good deal of time on just this process alone. Full disclosure: I had problematic brows to begin with (they didn’t grow where they were supposed to), and very little hair on the tails, so if you don’t have these issues, this step will take less time. But if you’re in my boat, microblading can actually create a whole different brow shape for you.

This was the progress made after the first session. As you can see, my brow shape has totally changed course!

yes, It Hurts, but you can Probably handle it

Depending on your pain tolerance, you might want to ask if your technician provides a numbing cream. My pain tolerance is pretty high, but I still opted for the numbing cream, because hey, why not? Even so, expect a fair bit of pain. It’s a tattoo! What you DON’T want to do, however, is take ibuprofen or any other kind of blood thinner prior to getting this done, because the last thing you want is to bleed too much.

Can microblading deliver some incredible results? Yes. Is it magic? No. One thing I didn’t anticipate was just how long it takes from the first visit to its fully healed result. It takes 10 to 14 days for your brows to heal, and the wound isn’t fully repaired for four to eight weeks after.

During the first 10 to 14 days, you want to avoid getting product, water, makeup, or anything else on your brows. I would go so far as to say you should avoid any activities that will cause you to sweat too much (sorry, Bikram yoga enthusiasts). When your skin starts feeling tight and itchy, leave it alone! It’s healing. If it’s really unbearable, Kendra recommends using a light dab of coconut oil to moisturize the area, but don’t do it more than twice a day.

When scabs appear, you want to let them fall off naturally. Remember that all of these precautions are for a reason — mainly, you don’t want to aggravate the pigment, causing it to “fall out.” This will shorten the lifespan of your new brows. Inevitably, there will be some pigment loss, which is why many microblading appointments are broken up into two sessions. And yes, the healing process takes just as long the second time around.

So your final brows may not emerge in all their glory until two months or so after your first appointment.

Here are my brows originally versus right after my touchup session. Bear in mind, the pigment is going to appear a lot darker immediately after the session as opposed to when it’s fully healed.

Unlike traditional brow tattoos, microblading lasts an average of two years, give or take depending on your skin type. Oilier skin will shed the color more quickly, while drier skin retains it better (I’m oily, so whomp whomp).

In order to keep the job looking as fresh as possible, after it’s settled, you’ll want to apply SPF 30 to 50 to keep the shade from fading or changing in the sun. If you love glycolic acid, microdermabrasion, and chemical face peel products, make sure you avoid the area, since that’ll also make you lose color faster.

Depending on where you go, the procedure can cost anywhere from $400 to $800. But if spending less time getting ready in the morning is worth it for you, then by all means, go for it! Spending moolah on brow products is also something I’m not gonna miss.

Here’s the final result after three sessions (I added in an extra session because my starter brows — coining it! — were particularly sparse) with ZERO product in ’em. BRB, throwing out my brow pencils/gels/powders.

Do you have any more questions about microblading? Reach out @BritandCo!

Kimberly Wang
Kimberly Wang writes about all things pop culture, tech, style, and beauty. She's a Bay Area transplant and has an MFA in Creative Writing from Columbia University. On a sunny New York day, you can find her hanging out with her mini schnauzer Isabelle Jellybean on a blanket in Central Park.
Beauty Trends
Skincare
Beauty Trends
More From Skincare