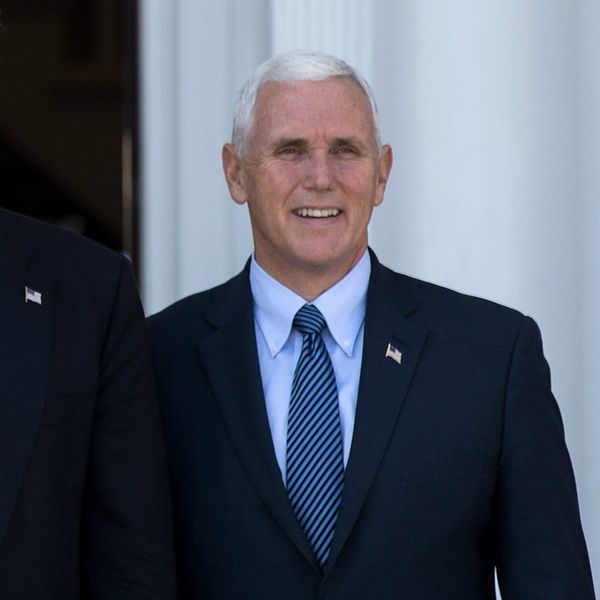 The cast of “Hamilton”(which has to inevitably become a movie) caused quite a ruckus Friday night when they directly addressed audience member and VP-elect Mike Pence, who showed up to take in the show.

In an impassioned monologue, Brandon Victor Dixon delivered the following message. “We, sir, we are the diverse America who are alarmed and anxious that your new administration will not protect us, our planet, our children, our parents, or defend us and uphold our inalienable rights, sir. But we truly hope this show has inspired you to uphold our American values and to work on behalf of all of us, all of us.”

The speech caused an absolute firestorm on Twitter, with everyone from President-elect Donald Trump to Chrissy Teigen weighing in.

The Theater must always be a safe and special place.The cast of Hamilton was very rude last night to a very good man, Mike Pence. Apologize!

The cast and producers of Hamilton, which I hear is highly overrated, should immediately apologize to Mike Pence for their terrible behavior

C. Teigs (whose Tweets are protected) and other liberal celebs weren’t having it, with Chrissy writing, “Look who wants a f*cking safe space now. The very thing him and his supporters make fun of as liberal political correctness. God, what a POS.”

They calmly, politely and respectfully voiced concerns about inequality. How is that rude? Video https://t.co/wwCUaSYCYO https://t.co/NMnL9P7Bpe

Others thought the move was downright rude, outraged that the cast would appeal to an off-duty official just trying to take in some entertainment, and it wasn’t long before the hashtag #BoycottHamilton was popping up.

But what did the man who sparked the cast’s impassioned speech have to say? The answer might truly shock you.

In an interview with Fox News Sunday, Pence was asked about #HamiltonGate, and TBH, he blew us away with an answer that could only be described as, well, gracious.

“My daughter and I and her cousins really enjoyed the show, “Hamilton” is just an incredible production,” he began. “Incredibly talented people, it was a real joy to be there. When we arrived we heard a few boos and we heard some cheers, and I nudged my kids and remind them, ‘that’s what freedom sounds like.’” Pretty objective so far, right?

But what of the cast’s actual speech? Turns out, Mike DID hear it, despite having left early, and apparently, it moved him too.

“I did hear what was said from the stage and I can tell you, I wasn’t offended by what was said, I’ll leave to others whether that was the appropriate venue to say it,” he said.

What surprised us most, however, was his decision to directly address the comments made in the speech.

“I do want to say that the basic element, the center of that message I want to address,” he started. “I know this is a very disappointing time for people that did not see their candidate win in this national election. I know that this is a very anxious time for some people. I just want to reassure people that what President-elect Donald Trump said on election night, he meant from the bottom of his heart. He is preparing to be the President of all of the people of the United States of America… I just want to reassure every American that in the days ahead, I’m very confident that they’re gonna’ see President-elect Donald Trump be President for all of the people. We embrace that principle and will work hard to make that principle every day that we serve.”

WOW. Throws you for a bit of a loop, doesn’t it?

When host Chris Wallace asked if he wanted an apology, Mike did seem to falter a bit, saying he would leave it to others to decide, but urged him to go see the show, saying it was great and that he “really enjoyed it.”

Well! We certainly weren’t expecting that! No matter what party you’re with or what you think of Pence personally, you’ve gotta’ admit, he handled it well.

Good for you, Governor Pence.

Were you surprised by Mike Pence’s response? Share with us @BritandCo.

Nicole Briese
Nicole is the weekend editor for Brit + Co who loves bringing you all the latest buzz. When she's not busy typing away into the wee hours, you can usually find her canoodling with her fur babies, rooting around in a bookstore, or rocking out at a concert of some sort (Guns N' Roses forever!). Check out all her latest musings and past work at nicolebjean.com.
Controversy
Politics
Controversy Politics twitter