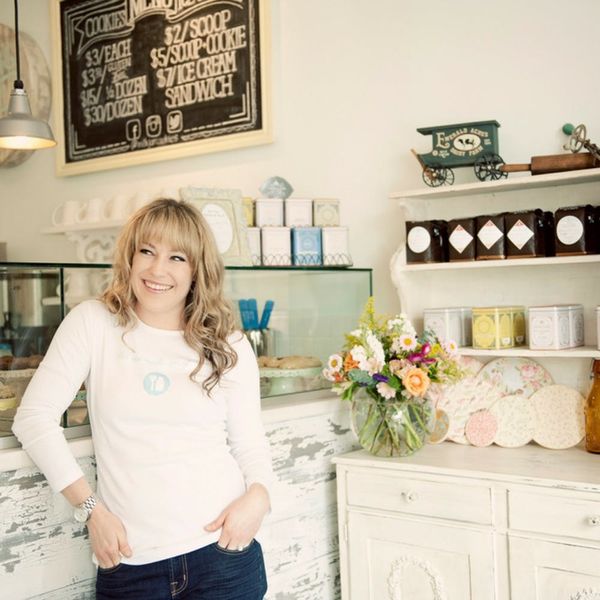 If there’s one thing in life that will never let you down, it’s cookies. Nobody knows that better than Courtney Cowan, owner of LA’s Milk Jar Cookies, who found a way to turn everyone’s favorite sweet treat into a career. After quitting her day job as a TV producer, she decided to start her own food business, and just a few years in, she’s already caught the attention of cookie lovers across the country, as well as major industry players like Williams Sonoma. We caught up with Cowan to learn how she went from producing TV to running her own business. Grab a glass of milk, and take in all the delicious advice she has to dish.

B+C: Talk to us a little bit about Milk Jar Cookie’s origins. How did it all start?

CC: I fell in love with baking cookies at an early age, and invented my own recipe as a teenager. As I perfected it over time, it became very popular with friends, family, and eventually co-workers. In 2005, I began developing a variety of flavors and started an online business while still working as a TV post producer. I loved that with each of the deliveries I made, someone’s day got a little bit brighter, and my end goal quickly became to go brick-and-mortar. I wanted a shop where I could host people and provide a friendly place to enjoy a cookie and a glass of milk, so in April of 2013, I opened the doors of Milk Jar Cookies in Los Angeles.

B+C: You left a pretty steady career as a TV producer to start the biz — any fears going in that the leap might not be worth it?

CC: As much as I loved my job in TV, I knew that I was not going to be fully satisfied until I gave my own company a hundred percent. I had been selling the cookies on the side for seven years when I finally decided to take the leap. Interestingly, I think making the decision to go for it was the hardest part for me, and I was filled with a sense of peace once I made up my mind. With the decision made, I finally felt the freedom to throw myself all the way in, and there was no looking back. I truly never feared that it wouldn’t be worth it, and I had no Plan B.

B+C: What’s the toughest part about owning a brick-and-mortar shop?

CC: For me, the toughest part is directly related to the best part — it never stops. Having a brick-and-mortar demands constant upkeep and maintenance, a full and productive staff, dealing with unforeseen challenges in the neighborhood, etc., and that requires an immense amount of work and creativity. I wouldn’t have it any other way, though. Being able to engage with our customers and provide a special, distinctive dine-in experience for them is why I started this company, and the good far outweighs the tough.

B+C: What was it like getting your product into Williams Sonoma?

CC: They contacted me last June and said they were trying cookies from all over the country to find a partner for a campaign in spring 2017 and had found us online. Over the course of about a month, they ordered cookies several times for taste-testing meetings, informing me each time that we’d made it to the next round. At the end of September, they let me know that they had chosen Milk Jar Cookies!

B+C: Do you have a guiding light? What piece of advice do you think has served you best so far?

CC: “Stay true to your vision.” Trying to do what others think you “should” do or getting caught up in comparison traps is never productive, so stay true to what makes your business special.

B+C: Any chance you’ll be moving beyond the LA city limits in the near future?

CC: We currently ship our cookies nationwide and recently opened a new shipping and delivery facility to handle the growth in that area of the business, which is very exciting. Additionally, I have a list of cities across the country in which I think Milk Jar would thrive, and I’m beginning to explore the possibility of opening shops in other markets!

B+C: Last and most important, how do you keep yourself from eating every cookie that comes out of your ovens?

CC: As fun as that would be, I don’t think it would be very good for business! I certainly find the time for some quality control every now and then, though. :)

Tweet us which girlboss we need to talk to next @BritandCo!

Kelsey Nelson
Kelsey Nelson is a born-and-raised Ohioan living life in South Carolina. She thrives at binge watching Netflix, contemplating what to order at the bar and running any trail or road she can get her feet on. In addition to being a Brit + Co contributor, she writes about southern pleasantries, DIY mishaps and more at North Living South. If she isn’t writing or running, she’s off adventuring with her husband Brad and their Lab/Dachshund mix, Gordy.
Cookie Recipes
Work
Cookie Recipes Girlboss
More From Work