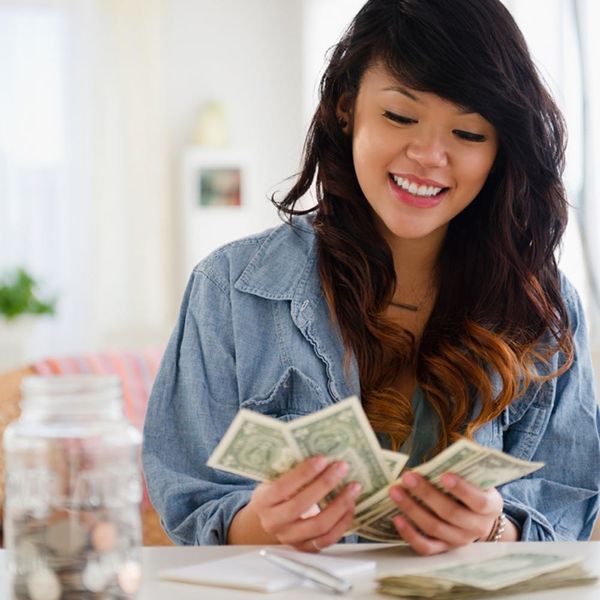 When finance app Acorns launched, it seemed like someone had finally tapped into the (potentially) game-changing secret to beefing up our savings accounts. It turns out that saving money suddenly becomes a lot easier when you don’t have to do it manually (and when it just sort of happens magically). Acorns knows how much we can afford to lose from our day-to-day checking account and does the dirty work for us by automatically investing our small change. For that, we are eternally grateful.

In addition to helping us become responsible adults by looking out for our financial interests right from our devices, Acorns is trying to learn more about how people handle their money outside of the app. Acorns recently released a Money Matters Report (TM) addressing millennial financial anxieties, and on January 11, they added an in-app platform called Grow, which is intended to help ease those fears.

CEO Noah Kerner hopes that Grow can give millennials the crash course they need to better manage their cash — especially at a time when debt is such a problem. “These numbers are staggering,” Noah says. ” I don’t accept that our schools think it’s okay to teach about sex but not money. We won’t sleep until we change the problem.”

In order to compile their report and set the stage for the Grow platform, Acorns conducted a survey of nearly 2,000 millennial respondents. Keep scrolling to read about a few of the more dramatic findings. Some of them may surprise you!

2. Most people don’t budget. Seventy-three percent of millennials do not have any sort of budget. Sixty percent said they have a general idea of where their money goes each month, but that still means that 40 percent of us don’t know that information.

3. Daily expenses take priority. More than 31 percent of millennials said that covering daily expenses was a top financial concern (rather than retirement, paying off debt, etc.).

4. Hello, Starbucks. More than 41 percent of survey respondents admitted to spending more money on their coffee fix in the last year than they had invested in their retirement. The average American spends about $1,100 annually on coffee.

5. Social media isn’t just for sharing selfies. Almost one-quarter of millennials prefer to get their financial news on social media.

6. More financial education is needed. The majority of millennials do not feel they were sufficiently educated about personal finance, which helps to explain many of these trends. According to the study, 70 percent of 18 to 35-year-olds do not feel high school and college gave them the financial tools they need.

7. Retirement isn’t top of mind. Less than nine percent of millennials save money with retirement as their priority. What were respondents’ top reasons for saving? Education, travel and leisure.

8. There’s a mixed bag of emotions when it comes to finances. Thirty-nine percent of millennials feel anxious about their financial future. Less than one-quarter — about 22 percent — feel confident it. Everyone else falls somewhere in between.

9. Finances affect people’s well-being. Nearly half of millennials — about 45 percent — say that difficulties with their personal finances have impacted their overall health and well-being.

Luckily for us, the pros at Acorns haven’t left us feeling completely hopeless. Here are a few basic tips from their team, which may help reverse some of the negative trends discovered in their report.

1. Start small. If you want to get into the investing game or start setting money aside, you don’t need to move large amounts around. Just do what you can. After all, something is better than nothing.

2. Stay steady. Establish reasonable habits that will allow you to start seeing some momentum in your savings. Consider investing your Saturday coffee allowance or simply moving a small portion of each paycheck into a savings account. It will add up!

3. Keep growing. Acorns wants millennials to stay educated about investing and hopes its users will take advantage of Grow for that purpose.

What do you wish someone had taught you about your personal finances? Tweet us @BritandCo!

Alli Hoff Kosik
Alli Hoff Kosik is a freelance writer who is passionate about reading, running, rainbow sprinkles, her lipstick collection, watching embarrassing reality TV, and drinking pink wine. She lives in Brooklyn with her husband and (in her dreams, at least) three golden retriever puppies. Listen to her talk books on The SSR Podcast.
money
Work
money
More From Work