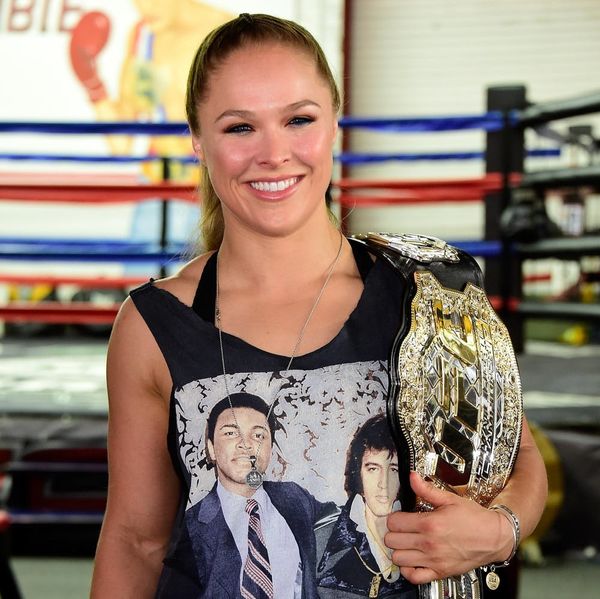 If you didn’t know that MMA superstar Ronda Rousey was engaged, we don’t blame you. The glass ceiling-smashing professional fighter likes to keep her personal life private. Which is why it may come as a surprise to fans that the martial artist married fellow MMA fighter Travis Browne over the weekend in an intimate friends-and-family wedding in Hawaii.

What an amazing day!! She is so perfect in every way! She makes me so happy! She is my other half! I Love You @rondarousey #browsey2017

In an Instagram post, Browne said, “What an amazing day!! She is so perfect in every way! She makes me so happy! She is my other half! I Love You @rondarousey,” adding the hashtag, #browsey2017. While fans of mixed martial arts wait for more pics of the pair, their wedding photographer, Michael Mardones, shared a selfie of Rousey and himself, showing off her plunge-neck gown in style. Her hair and makeup guru, Abraham Esparaza, also took to Instagram to show off details of her simple updo.

A close-up of the hair I gave @rondarousey for her wedding 👰🏼 thank you again for everything! Makeup by @heeezooo Hair by me! @oribe @ghd_northamerica @ghdhair @ysparkusa #rondarousey #weddinghair #hawaii #beauty #browdy

While rumors around MMA circles have swirled since 2015 about Rousey and her teammate’s romance, it wasn’t until April that the pair confirmed their engagement while on vacay in New Zealand with a cheeky Instagram post on Rousey’s account that showed her carrying him over the threshold.

When they first admitted their relationship, Browne told MMA news show The MMA Hour , “Dating is for children; dating is for kids. Ronda and I started talking throughout the summer, and I’ll say now that we are together.” He continued, “She’s my woman, and I’m her man. There’s no boyfriend-girlfriend stuff. There’s no dating. We’re together.”

As for Rousey, she told Ellen Degeneres back in 2016 that after her brutal loss to Holly Holm, she looked to Browne for support after contemplating suicide.

“I looked up and I saw my man Travis [Browne] was standing up there, and I looked up at him and I was like, I need to have his babies; I need to stay alive,” she added. “Really, that was it.”

Have you ever pulled off a super low-key celebration? Tell us how @BritandCo!

Kat Armstrong
Kat has been a writer, social media maven and mom for longer than she's willing to admit. She's also spent time in front of and behind the camera, interviewing celebs, politicians and acting as a producer for fashion and artistic photography shoots. When she isn't writing for various orgs and publications, she's hanging with her kids, husband and French Bulldog, Peter, in Toronto, Canada.
Celebrity Wedding
Celebrity News
Celebrity Wedding