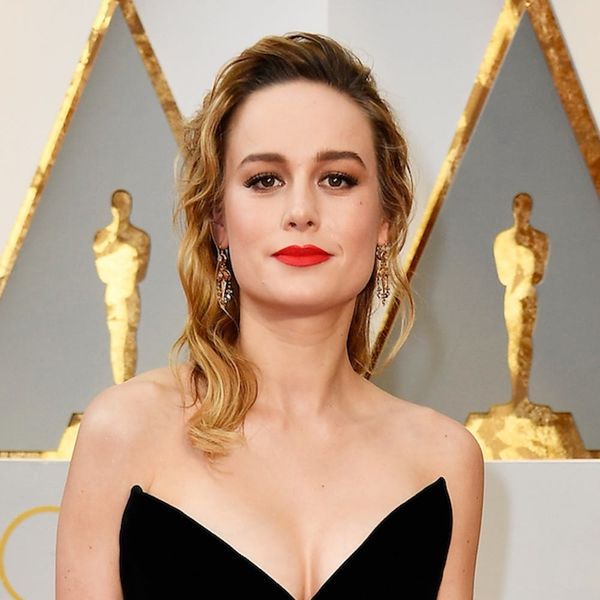 1.Brie Larson has had to hand not one, but TWO major acting awards to Casey Affleck in the past couple of months. In the case of the Oscars especially, Larson decided not to clap as Affleck, a man accused of sexual harassment, accepted his award, and for the first time she has confirmed that yes — it was intentional. “I think that whatever it was that I did onstage kind of spoke for itself,” she told Vanity Fair at the Hollywood premiere of her new movie, Kong: Skull Island. “I’ve said all that I need to say about that topic.” We hear you loud and clear. (Photo via Christopher Polk/Getty)

2. Nicki Minaj has FINALLY responded to Remy Ma’s diss tracks — with THREE new singles. At least two of the songs take aim at Remy Ma, while the third, “Regret in Your Tears,” seems to deal with her recent breakup with Meek Mill. On the most obvious response, “No Frauds,” Minaj recruited her old Young Money friends Lil Wayne and Drake, and you can LITERALLY hear Drake and Minaj laughing at Remy’s attempted back-to-back diss tracks (which is what Drake previously did to Meek Mill). “Here at Young Money, we don’t do diss records, we drop HIT RECORDS and diss u ON them,” Minaj wrote in a lengthy caption, which also included a challenge for Remy Ma to be able to book an interview or show within 72 hours without mentioning Minaj’s name — she said she’d give her half a million dollars if she could do it. (!)

3. Taylor Swift has been dealing with a super scary stalker sitch. Over the last few months, an obsessed 29-year-old man gained access to her NYC penthouse (where other celebs like Orlando Bloom and Steven Soderbergh live), got and stayed on the roof ’til the wee hours and rang her doorbell for an HOUR STRAIGHT, according to TMZ. He has been arrested and is being held on bond, which must be a minor relief for Swift. (Photo via Pascal Le Segretain/Getty)

4. The trailer for a live-action Little Mermaid is here, and it’s… a little weird?! This isn’t exactly like the live-action Disney remake of Beauty and the Beast, but rather an adaptation of the dark Hans Christian Andersen tale. The mermaid is a brunette, not a redhead, first of all (sorry, Lindsay), and she’s found in a tank as part of a circus show. There’s also no prince, but in this one, he’s a journalist. It’s in theaters on May 20.

5.The Weeknd and Daft Punk have released their “I Feel it Coming” video just in time for, ahem, the weekend. The song might be an amazing party jam, but the apocalyptic video is decidedly darker. The Weeknd serenades model Kiko Mizuhara (who, straight up, from a few angles totally gave us Bella Hadid vibes… awkward!) before everything and everyone freezes over. Check it out above.

6. Quote of the day: “Laughter is an instant vacation.” This classic Milton Berle quote rings true as we head into a weekend — hopefully a mini vacay for y’all. TGIF!

Do you have any big weekend plans? Let us know @BritandCo!