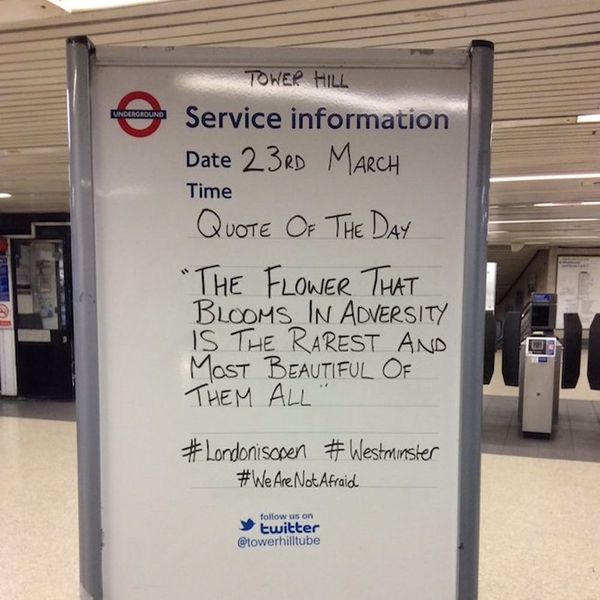 London carries on this morning after yesterday’s attacks. Check that and more of the top stories this morning out below.

1. Inspirational messages are being written on the service information signs in the London Underground and they’re so powerful. On the morning after what’s being called a terrorist attack left four dead and 40 injured in London, Tube stations across the city have messages of strength and unity written on their signs. “Hard to write today,” the Tower Hill Station Twitter account wrote along with a photo of its sign reading, “The flower that blooms in adversity is the rarest and most beautiful of them all.” Check out more of the signs here — and at the same time, be wary of fakes.

2. Houston high school student Ebony Banks, who has stage four cancer, just had her wish to see Beyoncé come true in a way she wasn’t expecting. Banks’ friends got to work spreading the hashtag #EBOBMEETSBEYONCE, and eventually it was arranged. Alief Hastings High School tweeted out a pic of the Facetime convo happening, thanking everyone who helped. Sniff.

3. Kim Kardashian calls Kanye West an “asshole” for scaring her at home after the robbery. In a clip for the upcoming episode of KUWTK, we get another glimpse of just how horrifying Kardashian’s Paris robbery was and the effect it had on her life after the fact. “Like, at three in the morning, he came in [after his concert], and that’s the same time the robbery happened,” Kardashian said. “After a concert, he can’t hear that well, so I’m going, ‘Hello, hello!’ Like, exactly what I did [during the robbery], and he’s not responding to me ’cause he can’t hear me.” After getting no response, Kim started crying and grabbed her daughter North West when West walked in. “I’m like, ‘Hello, asshole.’ We’ve got to come up with a plan. You’ve got to announce yourself.'”

4. The Love Actually reunion trailer is here and it’s all about *that* iconic scene. The 10-minute reunion special, Red Nose Day Actually, has its first full trailer, and we get to see the whole cast pay tribute to the awkward cue card scene. Check it out above, and watch Red Nose Day Actually on NBC on May 25.

5. Casey Wilson announced she’s pregnant! The Happy Endings alum said on her podcast, Bitch Sesh, that her and David Caspe are expecting their second child. She was feeling really sick for about a month, but now is “…not feeling great.” LOL! Here’s hoping she feels better soon, and congrats! (Photo via Tibrina Hobson/Getty)

6. Quote of the day: “We grieve, we fight on. This is the country we live in.” JK Rowling shares a heartwarming message in the wake of the London attacks.

How do you deal during hard times? Let us know over @BritandCo.