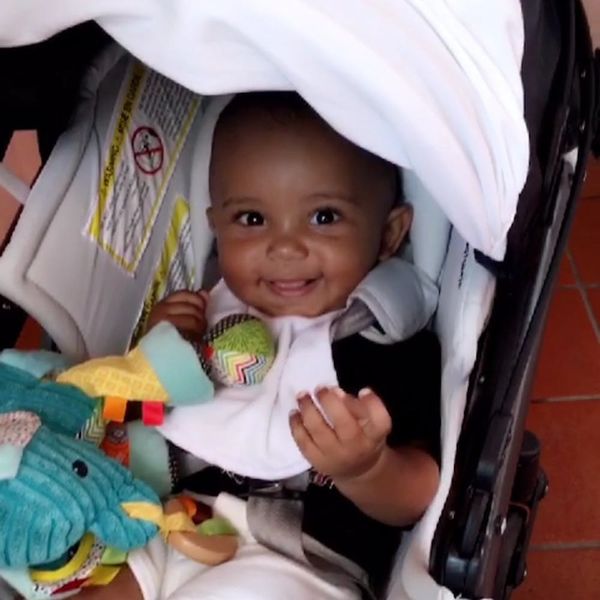 Happy Thursday morning, y’all! From one of the cutest babies in the world to yet another reason to make Amy Schumer your BFF, here are six of today’s top news items.

1. It’s official — Kim Kardashian and Kanye West make the cutest babies in the world. In the latest Snapchat peek at seven-month-old Saint West, he’s looking stylish in white shorts and a black tee as he smiles and giggles, then goes deadpan when he sees the camera on him — just like Kanye! And while we definitely see Kanye, Kim and big sister North here, it’s also crazy how much he looks like him and North’s BFF, cousin Penelope. Strong family genes all around!

So excited to announce our precious baby boy, Frederick Easton Klein was born 7/23/16. This little Champ has already mastered his warrior pose and is doing great. Our hearts are bursting with love and joy💗 #staylittleforever #wakingupklein #chrisklein #partyofthree

2. Chris Klein and wife Laina Rose introduce the world to their first son! Chris and Laina announced back in March that they were expecting their first child, and today they’re over the moon about their new addition. “So excited to announce our precious baby boy, Frederick Easton Klein was born 7/23/16,” Laina captioned the picture of the adorable new bundle of joy. “This little Champ has already mastered his warrior pose and is doing great. Our hearts are bursting with love and joy💗 #staylittleforever #wakingupklein #chrisklein #partyofthree.” Chris posted a pic of little Frederick on his Whosay account, writing, “So incredibly blessed and forever grateful for my amazing wife & our healthy baby boy. Laina delivered me a miracle.” Congrats!

.@vulture I would love her!

3. Amy Schumer responded to the Gilmore Girls trailer and it was perfection. So you’ve already seen the GG trailer a hundred times now and are wondering what to do to pass the time between now and its premiere date on November 25. How about daydream about a Lorelai Gilmore and Amy Schumer friendship? In the trailer, Lorelai and Rory are sitting around the table chatting about pop culture, like always, when Lorelai asks, “Do you think Amy Schumer would like me?” Rory says no, because Amy is too into water sports. Amy tweeted that she swears she’s only done water sports twice and just happened to be photographed both times, and went on to confirm that she would, in fact, love Lorelai. EEE!

4. Snooki just released a music video, because why not. Okay, this thing is LOLs. We can almost picture Nicole and Jenni sitting around joking about this and then making it a reality. “Here it is. My first music video,” Nicole wrote on Instagram. “I’ve decided to be an ass and record a song about my life and being a mom and shoot this fun and hysterical music video to go along with it.” On Youtube she gets out in front of the haters and reassures everyone not to take it too seriously — “it’s just meant to be fun and funny.” Going back to her alter ego YUNG MOMMY, she says, “I hope I win a Grammy for this one. YOUNG MOMMY, OUT.”

5. People are now using avocados instead of buns on burgers and our hearts are confused. We love avocados, but we also love burgers. Why would you mess with perfection in either sense?! The avocado bun was first spotted on the beauuuuutiful Food Deco Instagram and is starting to pop up — though not quite as prettily — elsewhere as a new food trend. What a time to be alive. (h/t Metro)

6. Quote of the day: “Don’t boo. Vote.” President Obama responds, in the midst of a beautiful speech, to the crowd’s boos at the mention of Donald Trump at the DNC. Perfect.

Do you think the avocado bun trend will take off? Would you try it? Let us know over @BritandCo!