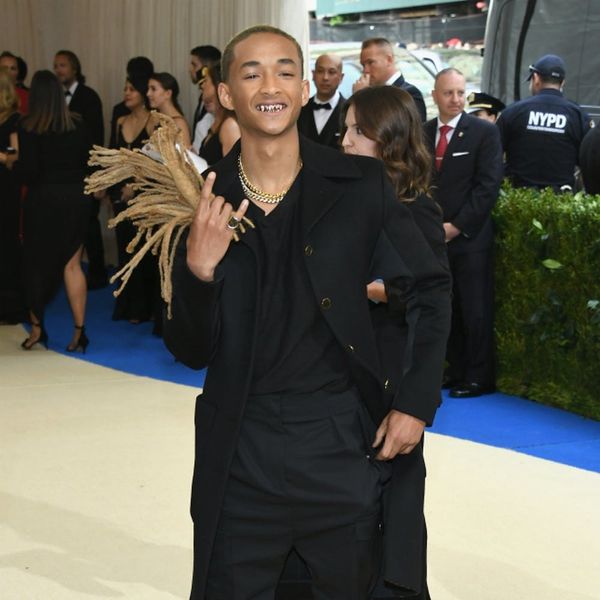 Jaden Smith really loves his sister and McDonald’s invented a new utensil! Check out those and more of this morning’s top news stories below.

1. The real reason behind Jaden Smith’s handful of dreadlocks is touching, maybe? Everyone was wondering why Jaden Smith’s Met Gala look included a handful of what are presumably his old dreadlocks, and his answer? “Since I couldn’t bring my sister as a date I brought my old hair.” Not exactly sure what his hair has to do with sister Willow, but it must be true that blood is thicker than dreadlocks? (Photo via Dia Dipaspul/Getty)

We’re raising the bar—#AllDayBreakfast, #SignatureCrafted, & now… The Frork™! Eh, maybe not so much with that one. 😂 pic.twitter.com/i5Xln45YvV

2. McDonald’s invented a new utensil to help you scoop up sauces that might fall out of their newest burger offerings. Yep, to help launch their Pico Guac, Sweet Bacon, and BBQ burgers, McDonald’s invented the “frork” AKA the French fry fork. And who else could help launch such a useless (but desirable) product? Everyone’s favorite infomercial host, Anthony Sullivan. If you order one of these new sandwiches between May 4-8, you’ll get free fries, a free drink and a frork to scoop up all the tasty sauce that might fall out of your burger. Sign us up.

My close friends and family know there are very few times when I'm left speechless... wow! I'm incredibly happy to welcome our new baby boy into the world, it's a moment that I will never forget for the rest of my life and my favourite memory I have so far. I'm completely in awe of his incredible mother and how she has been the whole way through this, she's really made my dreams come true. We haven't named him yet but he's already capturing hearts including mine. I feel very blessed. Happy Mother's Day everyone!

3. 1D’s Liam Payne and his girlfriend Cheryl Cole have named their baby! After getting to know their new little babe, the couple have settled on the name Bear Payne. They aren’t the only celebs to choose the name, either. According to The Daily Mail, they were inspired by Bear Gryllis, but baby Bear follows both Alicia Silverstone and Kate Winslet’s sons named Bear, and Jamie Oliver’s son, Buddy Bear.

OK, here it is. Please don't start flame wars over it, but this year I'd like to apologise for killing (whispers)… Snape. *runs for cover*

4. JK Rowling says she’s sorry for killing Snape. Every year, fans of Harry Potter commemorate the anniversary of “The Battle of Hogwarts,” and every year, the author takes a moment to pay tribute to one of the many characters who die in the final book in the series. This year, she took the time to apologize for killing off the much maligned Prof. Snape. Fans are divided on her announcement.

A special message from Janet for her fans. pic.twitter.com/VXa6h25ksK

5. Janet Jackson is resuming her world tour! After taking time off to give birth to her baby, Jackson took to Twitter last night to announce her return to the stage. She’s changing the tour’s name to “The State of the World,” but she insists it’s not about politics; it’s about “people.” Welcome back, Janet!

6. Quote of the day: “Beauty is whatever anyone thinks is beautiful.” Met Gala honoree, Rei Kawakubo.

How do you honor your siblings? Tell us @BritandCo!

Kat Armstrong
Kat has been a writer, social media maven and mom for longer than she's willing to admit. She's also spent time in front of and behind the camera, interviewing celebs, politicians and acting as a producer for fashion and artistic photography shoots. When she isn't writing for various orgs and publications, she's hanging with her kids, husband and French Bulldog, Peter, in Toronto, Canada.
Morning Buzz
Celebrity News
Morning Buzz