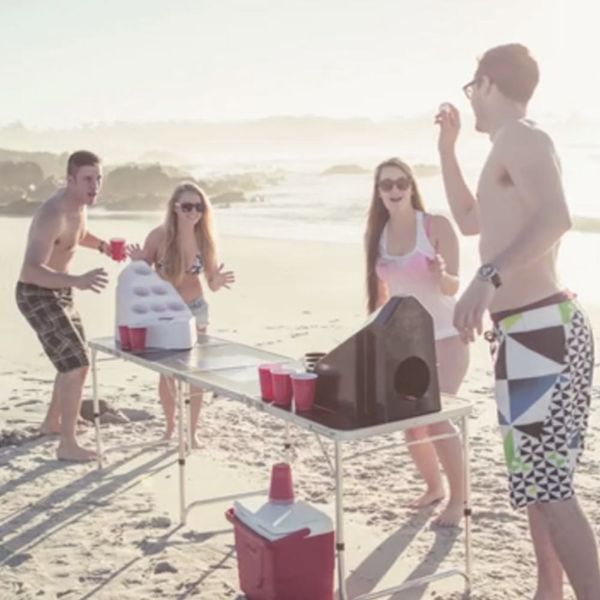 Anyone who thinks beer is just for boys is sooo two thousand and late. Ladies love a brew too, and we show our love via cool fashion, beer-inspired recipes and just straight up fancy beer.

Mountain Pong is the brainchild of Mike Rockwell, a guy not satisfied with mere plebeian pong. Nay, Mike wanted a challenge. He built a four-tiered contraption that lets pong players attempt to throw their balls at a mountain of beer. From the looks of this video, the hack makes the game way more challenging and fun.

A $50 donation to Mike’s Kickstarter will get you a pair of these babies. Or you can go to his website and buy them. While that might be steep for a night of drinking, we still think this beer mountain looks rad and we can’t wait until it’s less expensive and more widely available. We’re envisioning a pink zebra-printed set. GET ON IT, SPENCER’S GIFTS!

Until then, stay thirsty, my girl friends!

What’s your favorite drinking game? Tell us in the comments!

Molly Sanchez
Molly Sanchez is a writer, comedian and lover of burritos everywhere. She has written for The Bold Italic, Liquid Bread, Thrillist and HelloGiggles. She devotes her time to Bloody Mary research, exploring San Francisco and promoting wide spread shower beer awareness and appreciation. Find her on Twitter @seriousmolly trying to get famous people to laugh at her jokes or on Instagram @mollyfuckingsanchez where she swears a lot.
Kickstarter
Home News
Kickstarter
More From Home News