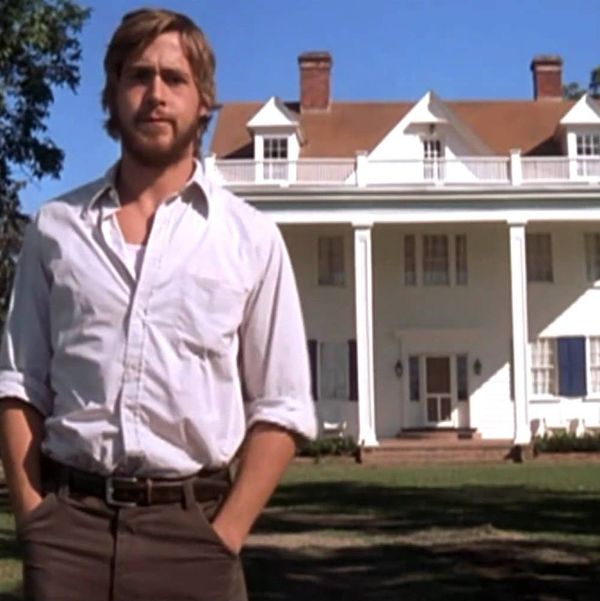 Sometimes what we’re seeing on the silver screen just looks too good to be true. And while most major movies are filmed on sound stages and production houses, sometimes directors and actors make their way to the real world for some uber-authentic filmmaking. So whether you’re binge watching your fave romantic movies or regrouping with a movie to watch after a breakup, we rounded up seven of our favorite movie locations you can actually visit.

1. Love Actually: Think Christmas carols, poster boards and doorbell declarations. It’s one of the most debatable scenes of all time. Was Andrew Lincoln’s declaration of love to our girl Keira Knightley the most romantic gesture in the world or the all-time lowest violation of bro-code? Whatever team you’re on, you can visit where it all went down at 27 St Luke’s Mews in Notting Hill, London. (Photo via Universal/IMDB)

2. Sex and the City: We can’t make a list of our fave fictional hangouts without putting Carrie Bradshaw’s pad on it. Though the real-life facade is located at 66 Perry Street, the chicest New Yorker we know was portrayed as living on E 73rd Street in the hit sitcom. Ah, the things we would give to chill on a stoop with that woman. (Photo via @sarahjessicaparker)

3. Friends With Benefits: When Mila Kunis and Justin Timberlake are the stars of the movie, we would go anywhere they stood in hopes of absorbing some of their residual beauty. Reenact their first date and grab a bite at Pershing Square, directly across from Grand Central Station. (Photo via @pershingsquarenyc)

4. The Notebook: Our favorite lovebirds Noah and Allie had us falling in love every minute of this movie. And while it was set in North Carolina, the majority of the project was filmed in neighboring South Carolina. You won’t be able to see a movie when you visit the American Theatre on King Street in Charleston, but you can still pretend Ryan Gosling is whispering sweet nothings in your ear on the street outside. (Photo via New Line Cinema Production/YouTube)

5. Knocked Up: Next time you and your girls are feeling the burn of a night out in Santa Monica, head over to Swingers Diner for breakfast. Skip the awkward morning-after convo with Seth Rogen and failed attempts at website startups. (Photo via Swingers Diner)

6. PS I Love You: The ultimate spot for drinking buddies, Teddy’s Bar in Brooklyn was where our fave couple Gerry and Holly spent much of their time before Gerry broke all of our hearts simultaneously. (Photo via Teddy’s Bar & Grill)

7. Bridesmaids: Calling all brides! Grab your girls and head over to Belle en Blanc, the infamous bridal shop where Maya Rudolph and her bridesmaids had one hell of a time. #Protip: Eat lunch post dress shopping. (Photo via Belle en Blanc)

Have you traveled to any of these (or other!) famous movie locales? Tweet us where and when @BritandCo!

Kelsey Nelson
Kelsey Nelson is a born-and-raised Ohioan living life in South Carolina. She thrives at binge watching Netflix, contemplating what to order at the bar and running any trail or road she can get her feet on. In addition to being a Brit + Co contributor, she writes about southern pleasantries, DIY mishaps and more at North Living South. If she isn’t writing or running, she’s off adventuring with her husband Brad and their Lab/Dachshund mix, Gordy.
road trip
Home News
road trip
More From Home News