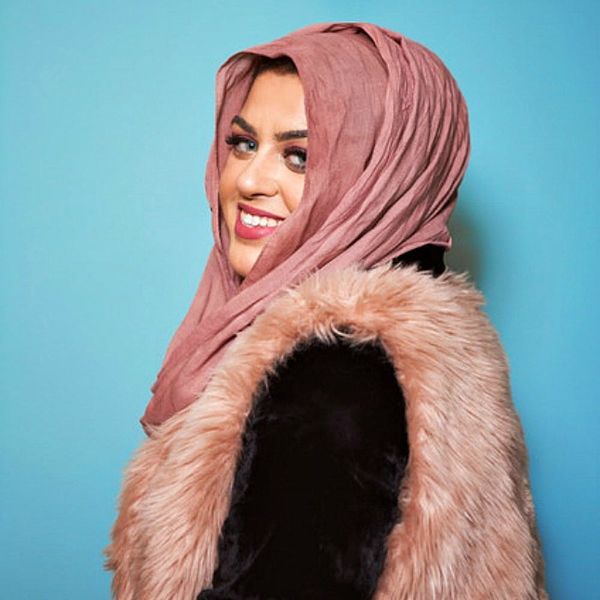 Representation in the media — seeing someone who you believe resembles you when you scroll through Instagram, turn on the TV, or binge Netflix — is becoming more and more diverse thanks to the hard-fought efforts of activists worldwide. But while we obviously still have a long way to go to achieve truly diverse and accessible content, there’s one badass lady who’s on a mission to make an inclusive and judgement-free platform for young Muslim chicks and those looking to learn more about the Muslim faith. That’s right; whether you simply want a place to learn about important current events, hear amazing girlboss Muslim profiles from around the world, or read superb content about pressing matters that young women *actually* want to chat about (including #OOTDs, beauty basics, and social media 101), we highly suggest checking out MuslimGirl.com ASAP.

distracting myself from hunger by working on a ramadan Q&A video lollll do a sista a favor & DM me your Qs! 🤗👅💦

So what made Founder and Editor-in-Chief of Muslim Girl Amani Al-Khatahtbeh start such a revolutionary website, which has now become the most-read platform for Muslim women’s voices in the West? “I launched Muslim Girl out of my bedroom when I was 17,” Al-Khatahtbeh told Teen Vogue. “It was after years of feeling like my voice as a Muslim woman was marginalized and neglected during a time when all the media could talk about was, ironically, Muslim women.” In fact, this period of her life was so tumultuous and confusing that Al-Khatahtbeh even began to lie about being a Muslim. “Starting Muslim Girl was not only my response to the lack of accurate representation of Muslims in the media — it also became my way of asserting my narrative as an American Muslim to the public and reclaiming my identity.”

Now with an ever-growing audience of youngsters looking to Al-Khatahtbeh and her staff for great content with a spotlight on Muslim fashion, world events, and the common everyday struggles of growing up female and Muslim in America, the MG team isn’t slowing down anytime soon. Al-Khatahtbeh’s accolades are also *definitely* starting to stack up. Not only was Amani invited by Michelle Obama to speak at the US State of Women Summit and launched the inaugural Muslim Women’s Day this year on March 27, but she also recently published a book called Muslim Girl ($20), a raw account of her experiences growing up as a Muslim-American in the wake of 9/11 and the never-ending war on terror, that has already deeply resonated with readers across the globe.

i'm proud to be part of the #unitedstateofwomen. the #womensmarch is over but there are still many ways to support work for gender equality. 100% of proceeds from these tees go to @usowomen ✊🏽💙

The MG team has also recently collaborated with a ton of fabulous partners to help spread their message of inclusivity and understanding even further. For instance, the MG team has a partnership with Getty Images to create a new stock photo collection of Muslim women doing everyday things like taking selfies, working out, and hanging with friends to combat the stereotypical images that plague waaay too many media stories. The fab ladies have also partnered with nail company ORLY to create a sweet new line of six halal-certified #HalalPaint nail polishes which features shades inspired by their subscribers like “What the Fatima” and “Ig-Noor the Haters.” And most recently, Al-Khatahtbeh has been tapped to share her wisdom as one of the keynote speakers at the Her Conference — an annual women-focused career conference in NYC that aims to inspire young ladies to learn more about their dream career and help equip them with the tools they need to slay at college and beyond.

So whether you’re looking to hear about all the pressing matters facing Muslim women today or simply in need of a real and hilariously authentic voice, we highly suggest checking out Al-Khatahtbeh on Twitter, Instagram, and MuslimGirl.com immediately. Seriously, we’ll wait!

Are you as inspired by Amani Al-Khatahtbeh as we are? Meet the girlboss herself at the 2017 Her Conference! Get your tickets for Her Conference here and don’t forget to tweet us your pictures of the event by mentioning @BritandCo!

(Featured photo via Her Campus)

Ashley Macey
Ashley Macey is a lifestyle freelance writer who loves all things fitness, wellness, and creativity. When she's not exploring her home in the Pacific Northwest with her dog Max, you'll probably find her curled up with a good book and some hot tea. Follow her daily jaunts on Twitter.
Girlboss
Creativity
Girlboss