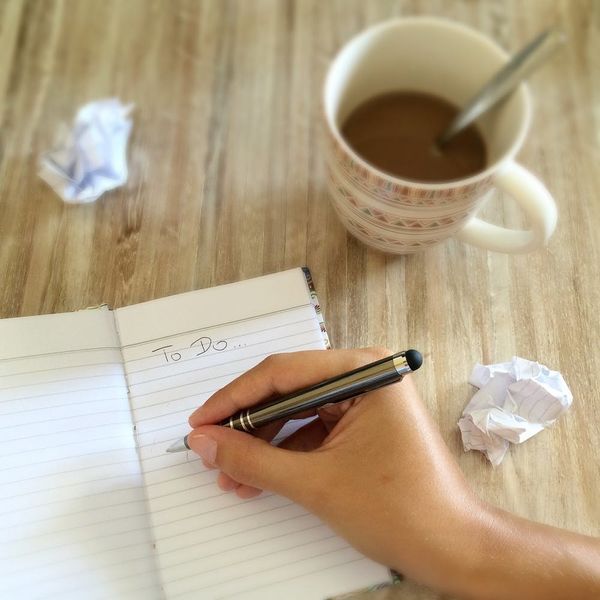 I came up with The List on a lazy Saturday in June, a few months before my 29th birthday. I was (probably) curled up in my slanket Liz Lemon-style in my tiny apartment, savoring my morning coffee and the fact that I didn’t have to go into work that day.

I’d just gotten back from my first sojourn out of the country since studying abroad in college: a weeklong trip to Germany for a friend’s wedding that had turned out to be a much-needed shock to my system. I had not realized just how much I operated on habits and autopilot until I was sucked out of my daily routine and into first London, then Frankfurt, and finally a tiny medieval village deep in the valleys of Hesse.

There was an element of self-actualization to this trip: For years I’d talked about going abroad and having adventures and generally doing more than going to work and then going to the gym or happy hour after work. Like most people, I had a long list of things that kept popping up in conversation alongside the phrase “oh, I’ve always wanted to do that.” Something about this trip made me realize that rinse-and-repeat wasn’t actually going to result in those things being done. Prior to adulthood, after all, habit eventually leads you to what’s next: high school, followed by college, followed by graduate school, followed by a job. I’d ticked all those boxes, but now that I was beyond the standard life checklist — at least the checklist items within my control — I was waiting for something to happen.

So in my slanket, I asked myself: What did I want to happen?

My 30th birthday — which for many women is, according to writer Ann Friedman, the magic year “when things start to get really good” — was in a little more than a year. Could I come up with the top 30 things I’d been saying I’d always wanted to do and do them all by the time the clock ticked over to my new decade?

I spent an hour (in my slanket) brainstorming everything that came out in those “oh, I’ve always wanted to do that” moments, regardless of how crazy or random it might have sounded: Go hot air ballooning. Try to be vegan for a week. Be debt free. Take a weekend trip to a place I’d never been before. Master crow pose in yoga. Learn how to play poker and properly cook a lobster. Find an excuse to wear a full Renaissance-era costume. Finally watch Gone With the Wind and read the last three Harry Potter books (I know, I know, I also don’t know why I stopped after The Goblet of Fire).

Some of the ideas I came up with in my slanket brainstorm were genuinely impossible to achieve by my 30th birthday — like it or not, for example, there was literally no way for me to be 100 percent debt-free in 14 months, given my student loan balance and my salary. Those I broke down into something I knew I could achieve, like paying off my credit card. And knowing that external motivation would be necessary to knocking some of the items off the List, I not only put it up on my fridge, but also on Facebook — which enlisted friends who reached out to me about skills and interests that I’d never even thought to ask them about (turned out one friend had briefly studied to be a sous-chef and offered to help with the lobster-making; another had been playing poker online for years and taught me over beers).

The 30th item on my list was to take a true solo trip: not to a wedding or some other obligation, but to go wherever the hell I wanted for a week. I chose the south of France in large part because of the #travel pictures I loved best in my Instagram feed. I set up an automated savings account to pay for it and whenever my job began to wear on me, a quick skim through pictures of Nice or Marseilles or a French lesson on DuoLingo motivated me to make those dollars.

Inevitably, I was unsuccessful at a couple of items. I had been saying for years that I wanted to do a proper road trip through California, so I added it to the List in that spirit, but that gradually became unrealistic both financially and schedule-wise. So instead, I acted on another impulse I’d been avoiding and got my first tattoo.

And something else was happening as I started to knock items off the list: Even though many of the List items were small things, they were helping me to recognize what I did and did not want in my life. Going vegan for a week, for example, forced me to get quite creative in the kitchen — and it led to some fun cooking lessons from two vegan friends — but the second the week was up I inhaled half a bowl of cream cheese dip. In sharp contrast, going a week without using a car or public transportation (something my environmentalist friends had been suggesting to me for years) led me to rediscover my love of bicycling. Veganism may not be for me, but to this day I am a regular bike commuter.

As a result, I finally confronted something I knew deep down was true when I set out to make the List: I really, really did not like my job. I had resisted this conclusion because, after all, I was fortunate to be working for a company that offered a good salary and benefits. Why would I rock the boat when I had that security? But in every other sense, the job was simply not a good fit, and that mismatched misery was leaking into the rest of my life. The zeal and fascination I felt exploring the items on my list was completely absent for the 8-10 hours a day I spent behind a desk doing something that seemed to grow further and further away from what I actually wanted out of my career. So I traded an item on the List for “find a new job.” And just before my birthday, after months of interviews and applications and networking coffees and more than one letdown, I found a new job — one that fit like a completed puzzle with my interests, skill set, and career goals.

I finished the last item on my list (actually completing the draft of a short story I’d begun years earlier) two days before I turned 30 — and a week later, I set off for France, ready to shrug off the slanket and tackle whatever my thirties brought.

Meg Massey is a New England nerd who has made Washington, DC her adopted home. When she is not writing or telling stories on stage, she is overcaffeinating herself with a good dark roast, dancing in costume with her competitive karaoke league, or binging British crime dramas on Netflix. You can read more of her work online at megmassey.net.

What are your 30th birthday plans or memories? Tell us @BritandCo!