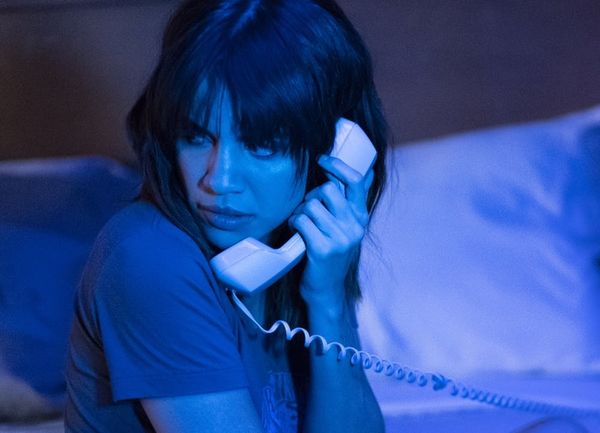 Natalie Morales has probably made you laugh on at least one of your favorite shows. And she’ll put her comedic chops to good use again on her upcoming NBC sitcom, Abby’s, expected in 2019. But first, she has a chilling turn in the November 30 episode of the Duplass brothers’ HBO show Room 104, aptly titled “A Nightmare.” She also directed the Black Mirror-esque December 7 episode, “Artificial.” We talked with the actress-director about her time both in front of and behind the camera on the series, which is currently in its second season.

Natalie Morales: No, I’m not at all! I just saw Suspiria and literally watched it through my fingers the whole time!

B+C: So what was that shoot like for you?

NM: It was so crazy. The episode I directed, I did first, and then while I was doing it, they asked me to do this one. So it was great because I already knew everybody; the person who directed the episode I acted in, Jonah Markowitz, is the production designer for the show. So I had already worked with him pretty closely, and I knew the rest of the crew. So that part of it was so fun. But doing a horror [show] was challenging in a way, because — believe it or not — screaming genuinely, the third or fourth time you have to do it, is really hard. There were definitely screams where I was like, “Nope, that wasn’t good. Let’s not do that one.” But it was really fun to do, and I’m glad I got to do something different.

B+C: It does seem like it would be exhausting to have to pretend to be scared for three days straight.

NM: It is! Your whole body is tense for like 12 hours. You’re exhausted at the end of it.

B+C: Let’s talk about the episode you directed, “Artificial.” How did that opportunity come about?

NM: I think Mark Duplass had seen some other stuff that I had directed, and he liked it, so he called me and asked if I could direct an episode, which was a total dream come true. I’m a huge fan of everything that the Duplass brothers do. I knew them sort of tangentially — I had auditioned for Togetherness years ago and I met both Jay and Mark at different parties. I wasn’t close with them or anything, so it was a really amazing thing to get that phone call. Just to know that something that you did actually paid off, you know? It was really fun, and getting to direct something Mark wrote was really amazing. I think he’s a really interesting and totally different writer. He always tries to do something completely out there, and it’s always brilliant.

B+C: The story for this episode was really interesting. What was your reaction to the script? Did you have a sense of how you wanted to direct it right away?

NM: I did. Whenever I listen to songs while I’m driving, I think about how I would make the music video in my head. I have since I was a kid. I’ve always created that in my brain. So it has to be a very bad script for me not to imagine it. [Laughs] And this was luckily not that. But it was hard — it was a hard combination of things to do. We shot a 30-minute episode in two days, which is insane. Usually, a single-camera half-hour show shoots in five to seven days, and we did it in two. And it was a lot of monologues, a lot of stunts, special effects, crazy lighting changes… So it was definitely a challenge. But I love that kind of stuff. I love directing.

B+C: Do you want to direct more TV?

NM: I do love it. I think I’m very spoiled at this point, though, because this is not your ordinary show. I think especially because I make most of my money acting, if I’m [directing] television, I really only want it to be something I’m already a big fan of, or something where I get to do something nuts and interesting and not just do the same thing people behind me have done. I’d have to be passionate about it and I’d have to really love the project.

B+C: Are there any shows in particular that would make the list?

NM: Oh, thank you! Yeah, we just wrapped last night. We finished our season, so I’m kind of emotional and have this really warm feeling in my belly. It was really an amazing, amazing experience.