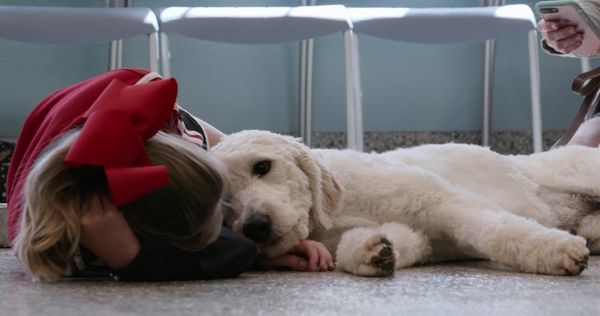 Add another Netflix original series to your must-watch list: The streaming service just announced a documentary series about human’s best friend, and it’s exactly the kind of comfort we could use right now.

Called, simply enough, Dogs, the six-part show follows the lives of six dogs and the humans who love them around the world, including Japan, Syria, Costa Rica, Italy, and the United States.

“In times of division, volatility, and confusion, Dogs is an emotional palate cleanse,” said co-producer Amy Berg, via Variety. “Watching the show offers a salve for the spirit and reminds us of the redemptive power of love.”

The stories range from four-legged friends being trained to assist people with medical needs, to the grooming and pet culture in Japan, to the adoption ecosystem in NYC, to one owner’s attempt to retrieve the dog he had to leave behind when he fled Syria, and more.

Along with Berg, veteran documentary maker Glen Zipper is helming the series. Zipper says the episodes aim to shine a light on just how important our relationships with the creatures are. “Dogs don’t just make us feel loved, dogs make us feel safe,” says Zipper. “In the world we live in today, no matter how divided we are, we should take care to realize how much dogs mean to all of us, and how our bond with them can help bring us together.”

Dogs premieres on Netflix on November 16 — and since science has proven that humans love dogs more than other people, you can bet we’ll be watching.

Are you going to watch this feel-good series? Let us know @BritandCo.