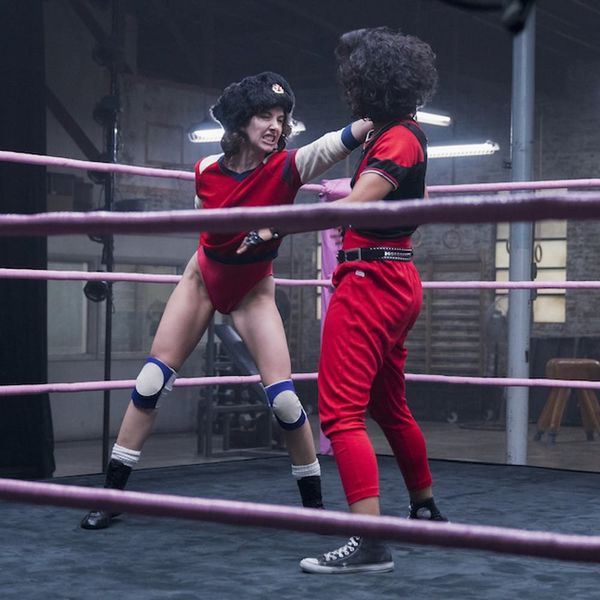 Netflix is a lot more than just a streaming service. The media company is also the creator of tons of original, binge-worthy content, including the massively popular Queer Eye reboot and a treasure trove of female-focused TV shows. To top it off, Netflix recently signed the Obamas to a multi-year production deal.

In our Women in TV series, we chat with female producers, writers, and crew members who prove that being in the entertainment industry isn’t just for boys. This week, we caught up with Sascha Rothchild, co-executive producer of Netflix’s GLOW, the butt-kicking show about professional women wrestlers in the ’80s. Season two premieres on June 29, and Rothchild shares a sneak peek into what’s new for the series. Bring on the glitter and allll the ’80s music!

Sascha Rothchild: I’m the co-executive producer of GLOW. Even though my title is “producer,” when people ask what I do, I say I’m a writer because that is the core of what I love and what I do. The producer title means that I’ve been writing long enough that I am also involved with being on-set for production and in post-production for editing. Being in the writers’ room of a TV show is the first step in the process of turning an idea into something that is shot and seen. I sit with other writers for months, and we all work together to figure out character development, storylines, and plot points. Then I go off and write specific episodes. When it’s time to actually shoot those episodes, I work with the director, actors, and crew to help get what is on the page to what will end up on the screen.

SR: Every TV show is different, but I’ve been very lucky to work with wonderful and efficient people, so the hours are reasonable. Usually, writers are in the room from about 10am to 6pm. When I’m off writing scripts, I start early. I wake up, walk the dogs, have coffee, and start writing about 8am. I usually end my day at 4pm. When I am on set, the hours are longer. Production is usually a 12-hour day and often there is work to do before and after shooting. Those days can be long, but it’s so exciting to see the words on the page come to life that for me days on-set go by very quickly.

SR: I studied playwriting in college, and moved to Los Angeles right after I graduated to pursue a career in TV writing. I wrote spec scripts [a TV script based on a show currently on television], got an agent, and had many meetings. But it wasn’t until I began writing magazine articles that I honed my own style and voice. And through those articles, I landed my first TV deal.

SR: People often ask, “What character do you write for?” With TV writing, you write for all the characters on that show. Your job as a writer is to understand and give voice to many different types of characters. It is not divided up.

B+C: What is one of your favorite things about working on GLOW?

SR: One thing that makes GLOW so special is all the women on set! Most of the writers are women. The showrunners are women. The cast is full of amazing women. This is rare in Hollywood. GLOW is an incredibly safe and supportive environment and often feels like a big fun crazy family dinner with lots of glitter.

B+C: Any fun behind-the-scenes moments while working on season two of GLOW?

SR: In season 1, we created over a dozen incredible characters, and the exciting thing about season 2 was getting to delve even deeper into each one. The actors are so talented, and when I write dialogue, I now have their voices in my head. I love writing a line and being certain Gayle Rankin, who plays Sheila the She Wolf, will deliver it with more heart and soul than I could have even imagined. Or Jackie Tohn, who plays Melrose, will bring life to a moment I didn’t expect. When watching the monitors, I’ve actually shed a tear during some of the dramatic and emotional Alison [Brie] and Betty [Gilpin] (who play Ruth and Debbie, respectively) scenes. And there are many of these scenes to look forward to this season.

Plus, I love watching the actors learn wrestling moves in our practice gym and then a week later seeing them in full wrestling character with costume and makeup and hair, throwing themselves around the ring like pros. This season, the wrestling skills alone are turned way up.

SR: When I started out, most TV writers rooms were filled with 10 men and maybe one woman. Now it seems things are slowly but amazingly shifting. I think with the shift into cable and streaming, more opportunities for women have become available, and women are ready to take them and are thriving at it.