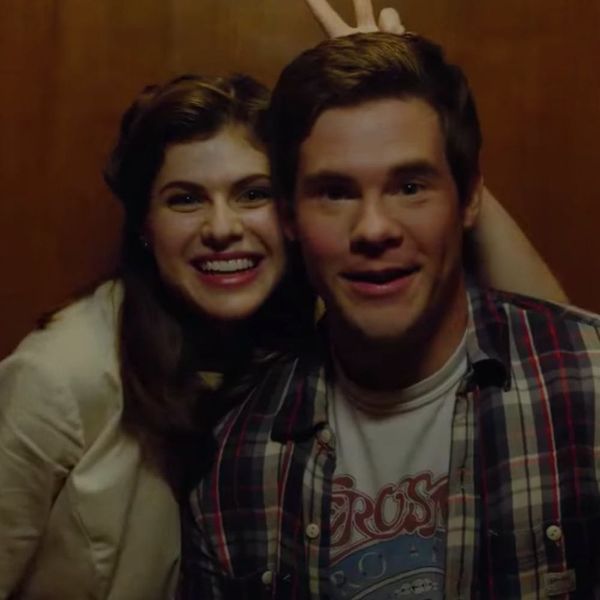 Having a crush on someone isn’t always fun, especially if the object of your affection doesn’t feel the way you do. And that’s certainly the case for Adam DeVine in the first trailer for Netflix’s new rom-com When We First Met.

Check out our new movie on Netflix Feb 9. @andybovine plays a guy who tries really hard to ruin a beautiful relationship between @alexandradaddario and I. Or something like that. But he’s the bad guy. For sure. @shelleyhennig and @kingbach are in it too!

The Pitch Perfect actor stars as Noah, opposite Alexandra Daddario as Avery, the girl of his dreams. Unfortunately for him, she just wants to be friends, which he accepts — until she gets engaged to someone else. In a drunken stupor, he finds himself in what turns out to be a magic time-traveling photo booth, which takes him back to the night when they first met — hence the title — so he can “do everything differently” and try to win her heart. (Think Groundhog Day meets…My Best Friend’s Wedding and About Time.)

Though his quest doesn’t go so well the first time around (or the second, or the third), he’s just not willing to give up.

Considering that the lady in question shows up on that infamous night as a member of the Rockford Peaches baseball team from A League of Their Own — the night they met was Halloween — we can totally see why DeVine’s character is crushing so hard. But what’s so bad about the “friend zone,” anyway?

What do you think of the trailer for When We First Met? Let us know @BritandCo.

Desiree O
Desirée O is a ‘Professional Bohemian’ who loves anything and everything related to the arts, entertainment, and pop culture. She ADORES being a ‘Newsy’ for Brit + Co, covering all of the latest tidbits of awesomeness that you want to read about. When she’s not writing, she’s either making messy art, going on long adventurous walks with her camera, or poking around over at bohemianizm (http://www.bohemianizm.com/). You can find out about Desirée O and her work at http://DesireeO.com/ or follow her on Twitter @DesireeO.
Netflix
Movies
Netflix
More From Movies