The 3 New Books to Make You Love Paris RN 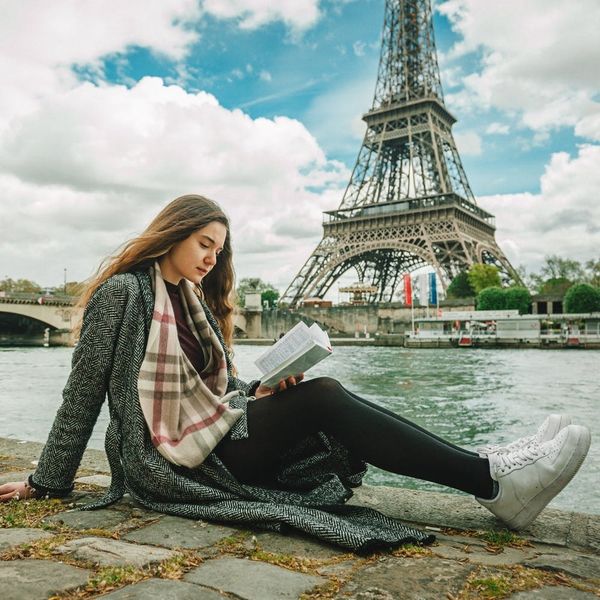 1. Saint-Germain-Des-Prés: Paris’ Rebel Quarter by John Baxter ($12): Australian transplant John Baxter finally moved to Paris after a fateful visit in 1969. He landed in Saint-Germain-Des-Pres, an area of the city which looks like the Paris of your dreams; avoiding the worst of modern architectural movements, the area remains quaint, filled with charming buildings and tiny shops. Baxter has written on Paris extensively (Five Nights in Paris, Paris at the End of the World, Hemingway’s Paris: A User’s Guide), and this book continues his reign as one of the city’s most devoted storytellers.

Functioning as a walking tour of the area, the book bills itself as a “narrative guidebook.” It tells the stories behind the storefronts and streets, making the reader feel as if she’s privy to a set of private, delicious secrets. It’s astounding how many stories fit into less than a square mile of Paris’s Left Bank, from the shop that let Marie Antoinette eat (gold-dusted) chocolate, to the workshop of the man who created the executioner’s tool that would later remove her head. The whole neighborhood revolves around the central point of its eponymous, mysterious medieval abbey.

The independent origins of the village have led to its status as a home of rebels, and the streets teem with the ghosts of Descartes, Sartre, Picasso and de Beauvoir, just a few of the multitudes of artists who partied, plotted and performed there. Saint-Germain-Des-Pres was an inspiration to them, and this book may be an inspiration to you to catch the next plane out. “It can’t be a coincidence,” Baxter writes, “that a man from Saint-Germain, Guy Debord, first proposed the theory of psychogeography: a sense of place so fundamental that it infuses emotion as powerfully as a drug.”

2. France: A Modern History from the Revolution to the War With Terror by Jonathan Fenby ($30): Speaking of the revolution, France has had its share of turmoil over the past couple of centuries: violence, uprisings and outright panic. In a century that almost makes the recent American election cycle seem staid, France of the 1800s was the site of Napoleon’s conquest and defeat, multiple coups, constantly changing presidents and even multiple different forms of attempted government. This odd history, which takes us all the way from 1815 to the current Fifth Republic, forms the basis of Fenby’s stroll through France’s past.

Fenby walks us through an analysis of how France has changed, both physically (the loss of colonies) and culturally (social change and cultural movements) through multiple wars and struggle, finding short periods of stable calm through the madness. He draws a concept map from the conflicts of the early 1800s to France’s most recent, harrowing brush with terrorism. After the 2015 bombing of the Bataclan theatre and the concurrent violence in the streets, the world responded by saying, “Je Suis Paris,” an echo of the earlier attacks on the offices of Charlie Hebdo. But what is Paris, and what is France, really? Can its history answer that question? Fenby hopes so.

“Fundamental questions remain,” Fenby writes. “Who has the right to rule and on the basis of what legitimacy? If politics are primordial, what form should they take — and in what framework? How can democracy coexist with effective executive government, and which should be given precedence?…Is violence justified in the pursuit of revolutionary ideals or in suppressing them…when do the people become the mob?” We consider these questions through Paris’s history, and perhaps even our own.

3. Treasure Palaces: Great Writers Visit Great Museums edited by Maggie Fergusson ($17): Okay, we’re cheating a little with this one. The 23 fantastic museums chronicled by a host of writers in this essay collection are from all over the world, not just France, but Paris holds its own with a sizeable representation. The Musée Rodin and the Musée de la Poupée both make an appearance, the only city in the book (besides New York) with more than one entry. Each entry, by a celebrated writer, is less a piece of art criticism than an attempt to create a memoir from a museum that had some sort of emotional connection to the author’s life.

“In a world dominated by commerce and commodity, by fashion and novelty, museums have become places where values endure,” writes Nicholas Serota, Director of Britain’s Tate Museum of Art. “In a society in which a sense of community or common space is now more rare, they provide a location for shared experience.” The contributors to Treasure Palaces share their experiences in a moving and diverse way, from the hauntingly bare Afghanistan National Museum portrayed by Rory Stewart, to the slightly bizarre Museum of Heartbreak in Zagreb, visited by Aminatta Forna, to Michael Morpurgo’s somber visit to the In Flanders Fields Museum, Ypres.

In the Parisian museums, young Alison Pearson comes to the realization in front of the works of Rodin that the feelings swirling inside her had been felt before, by people of all eras, and Jacqueline Wilson, a children’s book writer, secretly loves the “Victorian storybook” feel of the Museum of Dolls (Poupée). Both of them, along with their volume compatriots, show us that museums are more alive than stuffy, and more relevant than dated. Like Rodin’s The Kiss, and like our Parisian fantasies, they are interlocked forever in a permanent embrace.

What books make you say, “ah, oui!”? Tag us with the title of your next chic read @BritandCo.