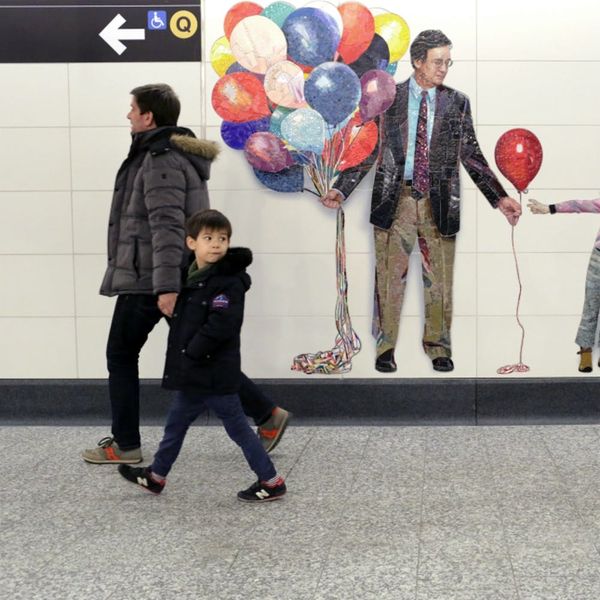 New York City’s 2nd Avenue subway has had a long and sordid history. The line, which originally started construction back in 1972 (that’s not a typo) just completed the first of its three-phase roll out with the opening of three subway stops along 2nd Ave. While some use the NYC subway to find love, people are flocking to the new line for a different reason. Brazil can have their sassy subway-riding grandpas, but New York has taken the mosaic art work of Brazillian Vik Muniz instead and created a moving testament to the differences all around us.

The brightly lit subway stops on the 2nd Ave line each feature different artists installations, and the 72nd Street station features mosaics of people you’d see passing you daily on your commute, including a gay couple holding hands. This specific pair, Thor Stockman and his husband Patrick Kellogg, are helping to normalize how we see gay people in our day-to-day lives. Simply by adding a gay couple to this massive public art piece, the way that the public sees and interacts with the LGBT community will become more normalized.

Thor and Patrick aren’t the only couple featured in the station, which hosts an assorted cast of characters, including Vik Muniz’s collaborator, Chuck Close, in a giant mural self portrait.

The collective installation, called “Perfect Strangers,” is, according to art historian Jonathan David Katz, a first in the city: a non-political piece of art depicting gay people. In an interview with the Associated Press, Katz says, “…the work naturalizes gayness within the fabric of the city, and in so doing, that’s actually an even more powerful message.”

For their part, Kellogg and Stockman simply posed for a photo for a friend a few years ago, never imagining the work would become part of such a public testament to their relationship. While it will still be a few more years before phases two and three of the subway line open to the public, we’re excited to pass by the gorgeous portraits available at the 72nd Street stop now.

What do you think about the new 2nd Ave subway line’s art? Tell us @BritandCo!

Kat Armstrong
Kat has been a writer, social media maven and mom for longer than she's willing to admit. She's also spent time in front of and behind the camera, interviewing celebs, politicians and acting as a producer for fashion and artistic photography shoots. When she isn't writing for various orgs and publications, she's hanging with her kids, husband and French Bulldog, Peter, in Toronto, Canada.
Art
Entertainment
Art
More From Entertainment