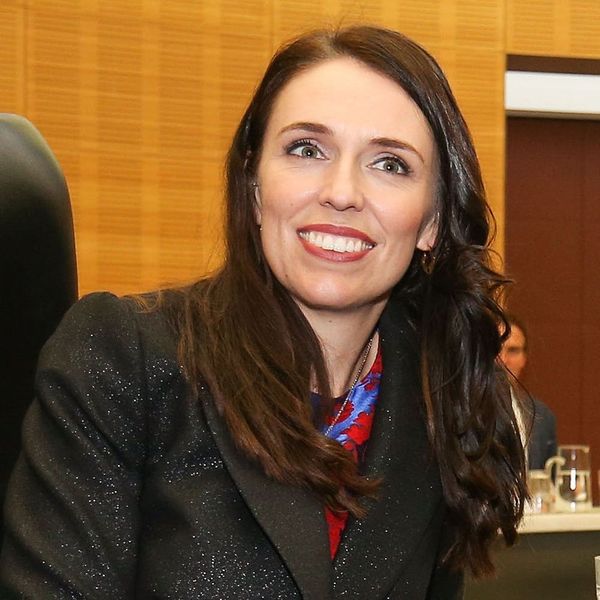 It seems that no matter how high you rise in this world, if you’re a woman, you’re going to have to deal with people asking creepy questions about your sex life. If you’re smart and hardworking and lucky enough to become a head of state, you’ll get asked about it on television!

Such was the case recently for New Zealand Prime Minister Jacinda Ardern, who, on a recent episode of the Australian news program 60 Minutes, was forced to answer questions about the conception of her child.

Reporter Charles Wooley seemed to dote on Ardern, describing himself as “smitten” with her in a promo for the segment. “I’ve met a lot of prime ministers in my time,” Wooley said. “But none so young, not too many so smart, and never one so attractive.”

Ardern, 37, came to power in a surprise election result in October of last year and in January announced she was pregnant, with the baby due in June.

“One really important political question that I want to ask you,” Wooley said. “And that is, what exactly is the date that the baby’s due?”

When Ardern answered, Wooley replied, “It’s interesting how many people have been counting back to the conception … as it were,” implying that the the baby was conceived during the election race (as if that is somehow relevant to anything). Ardern and her husband, who sat beside her, looked surprised. “Really?” Ardern asked.

Inexplicably confident in the merit of this line of questioning, Wooley soldiered on, going out of his way to bring up his own sex life. “Having produced six children, it doesn’t amaze me that people can have children; why shouldn’t a child be conceived during an election campaign?”

“The election was done,” Ardern clarified. “Not that we need to get into those details.”

Not surprisingly, reasonable people across Australia and New Zealand were horrified.

Charles Woolley is bloody painful. Was interested in the Jacinda Ardern interview on 60 Minutes but he made it cringeworthy.

Wooley: I'm here today with New Zealand Prime Minister Jacinda Ardern and her domestic partner Clarke Gayford.
*Turns to Gayford*
Wooley: So mate when did you knock her up?#60Minutes #OfShite

Dear New Zealand 🇳🇿, our best mate, you know how everyone has a creepy Uncle you need to avoid at Xmas parties? Sorry we got him to interview your PM. Please tell @jacindaardern we reckon it was gross.

Ardern, for her part, didn’t seem overly bothered by the interview. In a post-cabinet media address on Monday, she said that she was surprised by the questions about the date of her unborn child’s conception, but that she wasn’t “particularly fazed” by the experience.

Wooley has also weighed in on the controversy surrounding his interviewing style. In conversation with Newstalk ZB, Wooley drudged up a bunch of tired 1984 references as if that were an excuse for asking a head of state about her sex life. “It’s a bit Orwellian, you know, I think you got to be so careful with newspeak and thought crime and everything else,” said Wooley.

For the record, it’s not complicated. Just don’t ask prime ministers about their sex lives with their partners on the campaign trail.

Lia Grainger
Lia Grainger is a freelance journalist and reluctant nomad who divides her time between Canada and Spain, weather dependent. She's written for The Atlantic, Reader's Digest, the Toronto Star and other print and online publications, and her work appears in dozens of languages around the world.
Current Events
More From Current Events