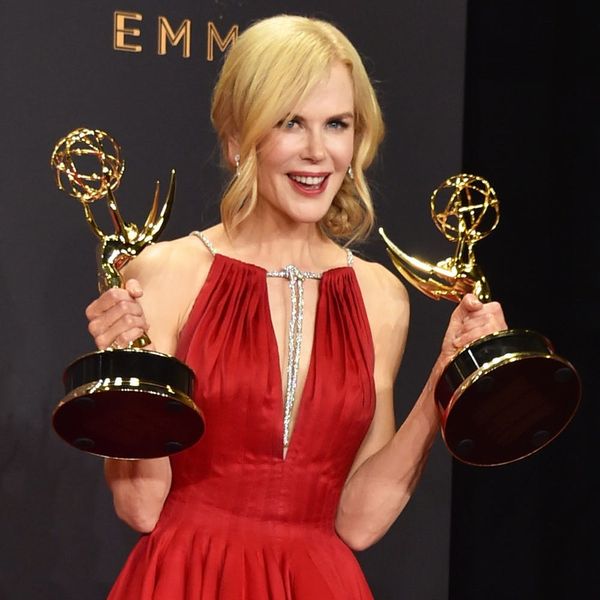 Though Nicole Kidman brought along her husband, Keith Urban, to the 2017 Emmys last month, it was her public display of affection with another man that had fans buzzing on social media. As her Big Little Lies costar Alexander Skarsgård walked to the stage to accept the award for Best Supporting Actor in a Limited Series or Movie, he passed by Laura Dern, who gave him a kiss on the cheek, and then Kidman, who planted a friendly but unmistakable smooch on his lips. People loved it — especially because Urban was standing right next to his wife at the time. Now the actress (who won her own Emmy that night) is addressing the blush-worthy moment, and to be honest, she’s still pretty flustered over the entire thing.

During her appearance on The Graham Norton Show last week, the host showed a pic of the duo’s embrace just seconds before the now-famous peck. “You are so provocative, Graham,” she quipped. “Why are you showing that?” (We think we know why.)

Norton played dumb. “What? It’s a lovely moment of celebration, Nicole,” he said innocently. No doubt about that!

“I kissed my husband too,” she said, to which Norton replied, “Well, he is right there.” Fellow guest Bryan Cranston then piped in, joking, “It looks like Keith is applauding the kiss. ‘Good kiss!'”

Kidman relented and explained the motivation for the PDA, saying, “I did kiss him… but you gotta understand, I did everything [on Big Little Lies] with Alex.” (Skarsgård played her husband on the HBO series.)

“I’ve got an amazing, supportive, gorgeous husband who I love more than anything in the world, and I gave Alex a congratulatory kiss and he’s like a mannequin,” she said. (Um, what’s that?) Perhaps realizing that her description of her costar was less than complimentary, she added quickly, “I mean, not a mannequin! I’m done, I’m done!”

While Kidman was obviously getting a little flustered, we have no doubt that plenty of other people would’ve given Skarsgård a big kiss on the lips if they were in the position to do so.

What do you think about Nicole Kidman’s take on kissing Alexander Skarsgård at the Emmys? Let us know @BritandCo.