Move Over, Cold Brew: Nitro Coffee Is Giving Us a New Kind of Buzz 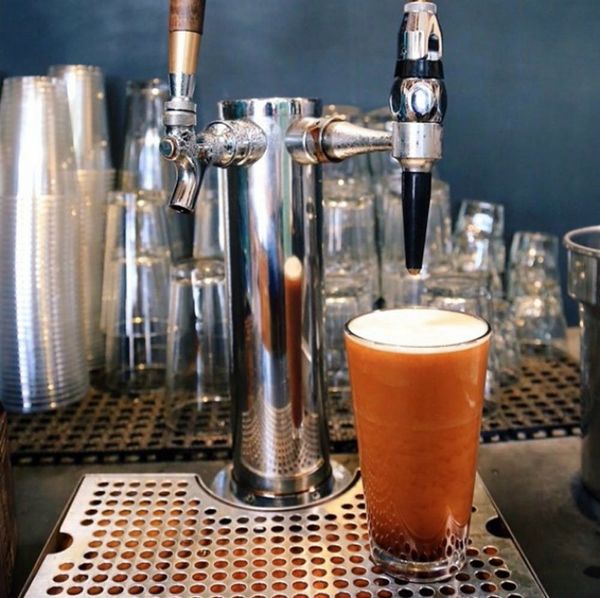 Cold brew may have reached its height as a mainstream trend with Starbucks announcing the launch of cold brew in more than 2,800 stores in North America. Cold brew is prepared differently from iced coffee, as it’s brewed in cold water and takes 12-24 hours to pull all the coffee flavor from the roasted beans. All that brewing time really pays off — cold brew lacks iced coffee’s sharpness, plus it’s richer, mellower and less acidic. While cold brew is quickly rising in popularity, the Pacific Northwest’s brew-tiques already have moved on to the next level of cold brew indulgence: nitro coffee.

Bon Appétit’s restaurant editor and food critic Andrew Knowlton has already predicted it will be one of 2015’s food trends. Portland’s Stumptown Coffee Roasters is arguably the first agent to develop this new technique to brew a glass of the refreshing buzz-maker, and they’ve been doing it for years.

So what is this nitro coffee? It’s a cold brew infused with nitrogen. Just think about that glass of nitro Guinness stout you had on St. Patty’s Day. Nitro Guinness is super smooth, creamy and velvety, just like nitro coffee. When a barista pours you a glass, you can see the bubbles cascading down the side of glass.

Where can we get a glass of this trendy drink? We’ve spotted the beverage on the menus of San Francisco’s Coffee Bar and in Seattle’s Anchors Down, in Ballard. Cuvee Coffee in Austin, Texas has its own nitro cold-brew product line called Black + Blue. And of course, Stumptown in Portland and LA carry nitro coffee.

Have you tried nitro coffee? Let us know if you find it in your town, and tell us how you like it.

Yuka Murai
As a fashion writer and official blogger at ELLE Japan, Yuka is always on the hunt for awe-inspiring stories, ideas and products from all over the world. Raised in Tokyo, she currently resides in the outskirts of Portland, OR. She has a two-year-old son and a newborn daughter.
Drink
Recipes
Drink
The Conversation