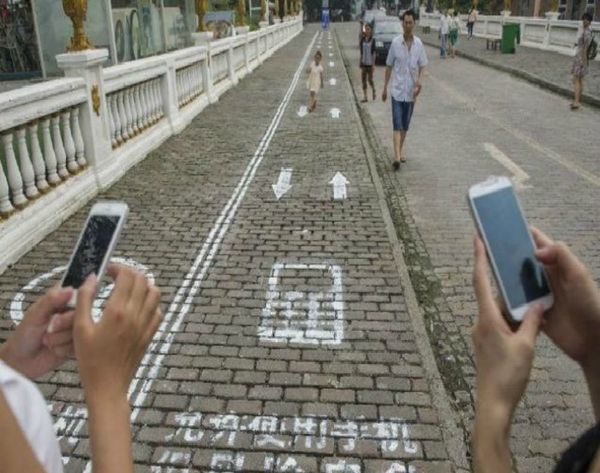 Few things are more frustrating than having to wind around pedestrians glued to their phones and tablets, never even bothering to look up to see where they’re going. So it does our hearts some good to see a cool strategy that is trying to fix the problem. Case and point: these streets separate the tech zombies from those actually trying to get somewhere.

In the Chongqing province of China, home to about 28 million people, streets now have separate lanes for those using and not using mobile devices. A short strip of sidewalk is divided in two, with one section designated a “no cell phone” lane.

Apparently, people looking at their phones were causing lots of “unnecessary collisions,” especially with the elderly and children walking on the same street.

While the initiative was intended to be satirical more than anything else, it’s an interesting idea for how we might need or want to designate spaces on the sidewalks of the future.

But the true irony may be in the fact that the street has become somewhat of a tourist attraction. Many pedestrians have been stopping to take pictures of the signs and the makings on the sidewalk. As they walk down the street, posting to Instagram and Twitter, it’s pretty clear why having that designated space could come in handy. And while this idea may not be as original as it claims, we still think it’s a good effort all around.

What do you think of this new urban planning strategy? Would you like to see it in your own city, or do you think it would just be ignored? Tell us your opinions below!

Nora Landis-Shack
Nora is a writer, photographer, foodie and feminist. After living in New York City for 23 years, she recently moved San Francisco and can't wait to explore. When she's not pursuing her interests in health and technology, she loves hiking, yoga, playing piano and squealing over kittens as an ASPCA volunteer.
Tech