Become a Top Chef With This Easy-to-Use Kitchen Gadget 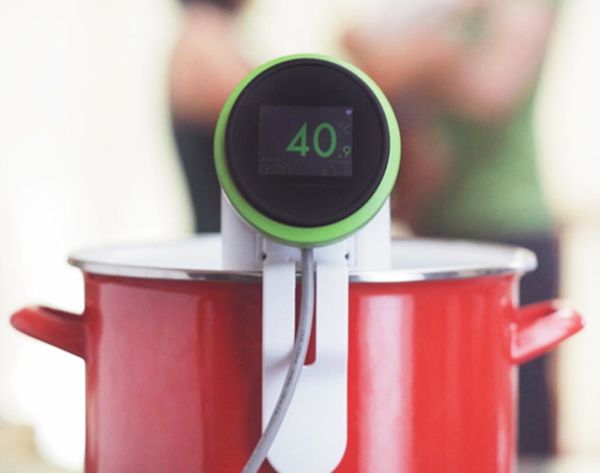 The sous-vide cooking technique is one you normally don’t hear about outside the four walls of a fancy restaurant kitchen (unless you obsessively watch the Food Network or Top Chef). Even if you binge-watch cooking shows and have a few good chef tricks up your sleeve, you may still be lacking in this particular department. Unless of course you’re already cookin’ in the kitchen with Nomiku.

Remember the Nomiku, the world’s most compact immersion circulator? It’s one of our new fave high-tech kitchen gadgets that allows home chefs to easily sous-vide their way to a five-star meal from the comfort of their own kitchen. Well, it looks like that was just the first course — Nomiku co-founder and CEO (oh, and Re:Make speaker ;) Lisa Fetterman is back with a second helping known as, the Nomiku 2.0.

The newest version of the Nomiku can do everything that the original can, plus more. Perfectly poached eggs for your brunch party? Check. The juiciest chicken you’ve ever had in your life? Yep. Fall-off-the-bone ribs for your next backyard BBQ? Absolutely. This Kickstarter gadget is one you’re not going to be able to live without once you hook it up at home.

The Nomiku 2.0 (available $149 through Kickstarter) is smaller, smarter and cheaper than the original Nomiku ($300) and it’s WiFi-connected. While both have a similar design that clip to your pot, the 2.0 is more compact and clips to the front of the pot (as opposed to the back). The sophomore product is also a lot easier to clean (the bottom is now removable) and uses less water. The original was released along with a super cute website that shares tons of recipe ideas, but the new version will work alongside a not-yet-launched app for both iOS and Android users called Tender (not to be confused with Tinder.

The Tender app will give you access to recipes created by some of the most talented chefs in the world (Chris Cosentino and Hugh Acheson, to name a few). Aside from gaining access for killer recipes, you can also create your own, share with others and send the time and temp of a recipe directly to your Nomiku (that’s where those handy WiFi capabilities come into play!). Creating five-star restaurant-quality meals has never been simpler.

We are very into this gadget, because it not only allows you to be adventurous in the kitchen, it also makes a fancy schmancy cooking technique perfectly accessible to the home chef. Some gadgets make your cooking life easier, this one does that AND opens up a whole new world of possibilities. And we have Lisa Fetterman to thank for it and our egg-cellent eggs bennie. Did we mention this maker will be speaking at Re:Make, officially making all of our high-tech cooking dreams come true IRL?!

Will you use the Nomiku 2.0? Let us know your thoughts in the comments below!

Rachel Sumner
Rachel is a Contributing Editor at Brit + Co and the founding editor of lifestyle blog, SADIERAE + CO. While her background is in fashion and styling, she also loves all things creative, cooking, traveling, binge-watching TV shows and giving piggy back rides to her golden retriever, Louie.
Kickstarter
Kitchen Tools and Gadgets
Kickstarter Kitchen Gadgets Kitchen Tools Re:Make
The Conversation