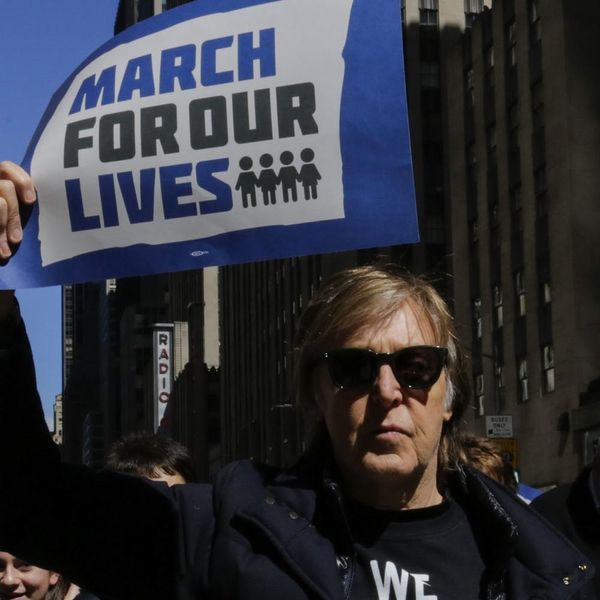 We saw many celebrities turning up to support the the rally organized by survivors of the Parkland Marjory Stoneman Douglas High School, March for Our Lives today, from Amal and George Clooney to Kim Kardashian and Kanye West. While all of them undoubtedly had their reasons for being there, the march hit super close to home for Sir Paul McCartney, who revealed that he was attending in honor of late friend and bandmate, John Lennon.

Donning a t-shirt emblazoned with the words, “We can end gun violence,” the music legend took time out for an interview with CNN, saying that while he didn’t know exactly how the march would affect future legislature, “this is what we can do, and so, I’m here to do it.”

"One of my best friends was killed in gun violence right around here, so it's important to me," says Paul McCartney, remembering his Beatles bandmate John Lennon at the March for Our Lives in New York City https://t.co/u4aBKWC1Jb pic.twitter.com/8Jnjn8A3xH

He went on to reference Lennon’s death, telling “One of my best friends was killed in gun violence right around here, so it’s important to me. ”

Lennon was killed in December of 1980 at the hands of Mark David Chapman, who shot the musician four times in the arch of his doorway. He later told a parole board that he killed Lennon to get attention.

Though the Beatles had broken up 10 years prior to Lennon’s death, McCartney was reportedly devastated by the news, saying, “I can’t tell you how much it hurts to lose him. His death is a bitter, cruel blow — I loved that guy.”

What do you think of Paul’s powerful gesture? Share over @BritandCo.

Nicole Briese
Nicole is the weekend editor for Brit + Co who loves bringing you all the latest buzz. When she's not busy typing away into the wee hours, you can usually find her canoodling with her fur babies, rooting around in a bookstore, or rocking out at a concert of some sort (Guns N' Roses forever!). Check out all her latest musings and past work at nicolebjean.com.
Celebrities
Current Events
Celebrities Music Nostalgia
More From Current Events