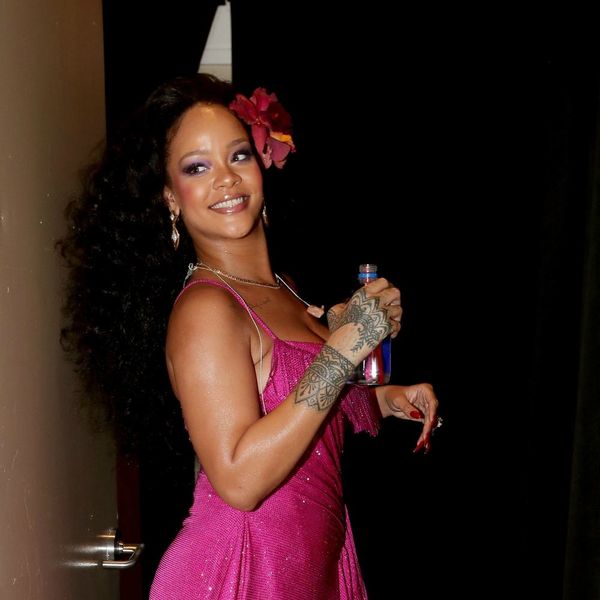 Although Kesha’s stirring performance of her comeback hit “Praying” may have been the most inspiring of the night, Rihanna’s Grammys performance also sparked conversation. The “Wild Thoughts” songstress returned to the Grammy stage to perform said hit with DJ Khaled and Bryson Tiller, slaying the stage in typical RiRi fashion.

While many viewers vocally expressed their love for every moment of Rihanna’s performance (even turning the Bajan superstar into a gif), some people decided that the singer’s curvier figure proved an ongoing fan theory that she is pregnant. In doing so, these people showed that somehow, in 2018, body shaming is still alive and well, and no one, not even Rihanna, is immune.

Public speculation over Rihanna’s weight is nothing new (and never cool). In October of last year, the 29-year-old singer told The Cut, “I actually have had the pleasure of a fluctuating body type,” which she appears to accept and embrace. In the last year, Rihanna’s bodily fluctuations have earned her the nickname “Thickanna;” while the nickname is generally meant to show appreciation for the singer’s fuller figure, Grammys night’s peanut gallery goes to show how quickly even positive body speculation can take an ugly turn.

Rihanna looking a little pregnant up on that stage #Grammys2018 pic.twitter.com/fHJ84QleJK

While it may not seem like that big of a deal to wonder out loud if someone is pregnant, this is one of the most common forms of body shaming. Debating whether a woman is pregnant is presumptuous and rude, and a good rule of thumb is to not assume a woman is pregnant unless she tells you she is.

Thankfully, the commentary doesn’t seem to bother the Fenty Beauty boss, as she embraces and loves her bod no matter how thick or thin. If only the rest of us could get over it, too.

What do you think of the speculation over Rihanna’s body? Let us know @BritandCo!

Kat Armstrong
Kat has been a writer, social media maven and mom for longer than she's willing to admit. She's also spent time in front of and behind the camera, interviewing celebs, politicians and acting as a producer for fashion and artistic photography shoots. When she isn't writing for various orgs and publications, she's hanging with her kids, husband and French Bulldog, Peter, in Toronto, Canada.
Controversy
Body Positivity
Controversy Grammy Awards