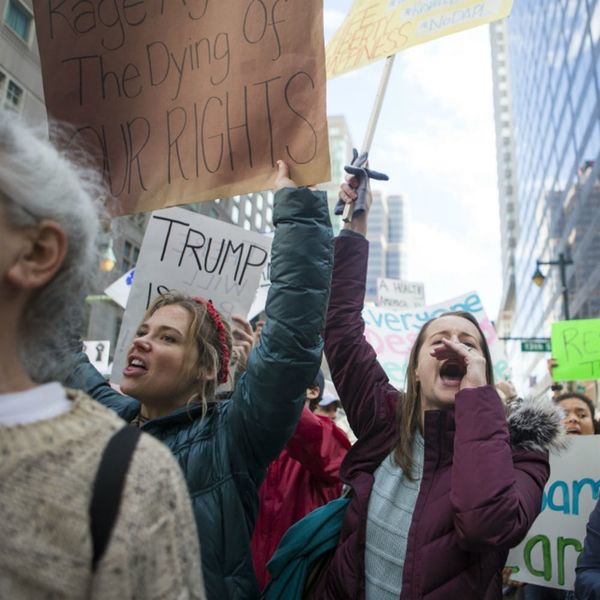 The Women’s March on Washington was, by many accounts, quite the success. It sparked a movement of activism throughout the nation, and offered many people who feared the change to come with President Trump’s inauguration a glimmer of hope for the future. With protests quickly becoming the norm these days, (see: when the travel ban first was enacted, or when Bella and Gigi Hadid marched in NYC), it’s no surprise that several more DC protests are already in the works. Now, yet another new protest is gaining momentum on social media, thanks in part to one writer in particular over at Slate.

Just after the inauguration, writer Frank Lesser Tweeted about the lack of transparency surrounding President Trump’s tax returns. Historically, presidents release their tax returns as an act of good faith to show, for example, that they do not hold off-shore accounts, have monetary ties to countries that may be deemed an enemy or are beholden to any acts of blackmail, in a tradition that began with President Nixon in 1973. “People have got a right to know whether or not their president is a crook,” Nixon said at the time. “Well, I am not a crook.”

Trump claims no one cares about his taxes. The next mass protest should be on Tax Day to prove him wrong.

Frank’s tweet, along with subsequent others, gained momentum as people began to voice their grievances about the lack of openness regarding the President’s international financial ties. Now, those same Tweets have become a rallying cry for a major march being planned on DC on April 15th — tax deadline day. Dubbed the Tax Day March or “Trump’s Tax Day,” marchers in roughly 37 cities are expected to descend on Washington to demand the President release his financial information, with the Women’s March calling for even more in its “other action ideas” section.

With a current open lawsuit against the administration regarding payments from foreign governments that would break the Constitutions Emoluments clause (and possibly start impeachment proceedings), we suspect this will get much messier before it gets any better, but in the meantime, you can get all the scoop on the marches near you here.

What marches will you consider taking part in this year? Give us the scoop @BritandCo!

Kat Armstrong
Kat has been a writer, social media maven and mom for longer than she's willing to admit. She's also spent time in front of and behind the camera, interviewing celebs, politicians and acting as a producer for fashion and artistic photography shoots. When she isn't writing for various orgs and publications, she's hanging with her kids, husband and French Bulldog, Peter, in Toronto, Canada.
money
Politics
money Politics
More From Politics