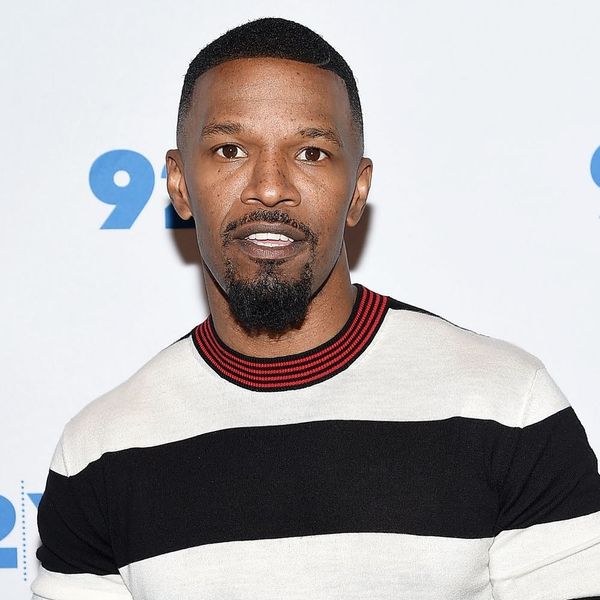 Celebs are no strangers to controversy. In the past few weeks alone, Demi Lovato took some serious heat for her hairstyle in her new “No Promises” video after some viewed it as cultural appropriation, and Miss USA was slammed for her comments regarding feminism and health care. Now, Jamie Foxx is getting his own dose of backlash for — get this — making up sign language on TV.

It was during his Friday night appearance on The Tonight Show Starring Jimmy Fallon that Foxx, for whatever reason, thought it would be funny to mimic sign language as the host threw the segment to a commercial break.

.@iamjamiefoxx, It is straight up disrespectful to make up sign language.

Everything is in gibberish. pic.twitter.com/X5AHkusq3o

His questionable “joke” instantly offended fans, 28-year-old model and Dancing With the Stars season 22 winner Nyle DiMarco (who just so happens to be deaf), included. The reality show alum slammed Foxx on Twitter, sharing a video of the incident and calling it “straight up disrespectful.”

My response to Jamie Foxx making up sign language on Fallon Tonight with @jimmyfallon. pic.twitter.com/GpDN8iB9xL

DiMarco went on to post an open letter aimed at the 49-year-old actor, writing: “Jamie Foxx’s behavior with Jimmy Fallon on Fallon Tonight should not be tolerated anywhere. We simply do not make fun at the expense of other cultures especially those with a history of being marginalized. When we do this, progress takes a step backward.”

The passionate advocate then sent out one last tweet, this time addressing Fallon and his show, asking: “@jimmyfallon@FallonTonight how was this allowed? How was this allowed? Where’s the cultural sensitivity. Not comedy when you make fun of others.”

Mr. @iamjamiefoxx. I'd be happy to give you sign language lessons so you could be funnier. https://t.co/FwaRsKovrg

DiMarco wasn’t the only high-profile name to scold the Oscar winner. Marlee Matlin, a fellow DWTS contestant, activist, and actress, also took to Twitter to address the incident as soon as it happened. Choosing to use a somewhat lighter tone, she wrote: “Mr. @iamjamiefoxx. I’d be happy to give you sign language lessons so you could be funnier.”

Non-celebs also made sure to voice their opinions, calling Foxx’s actions “rude” and “offensive.”

Jamie Foxx, American Sign Language is a way how we talk to eachother with structure. That was was rude and gibberish. @jimmyfallon

@FoxNews I have some sign language for Jamie Foxx… It only requires one finger.

Foxx has yet to respond.

What do you think of Foxx’s actions? Tweet us @BritandCo.

Barbara Pavone
Barbara Pavone is a pop culture-obsessed writer based in beautiful (but ridiculously cold) Montreal, Canada. When she's not working, she's sipping on a Pimm's Cup and daydreaming about her celebrity hero, Saint West.
Controversy
Celebrity News
Controversy
More From Celebrity News