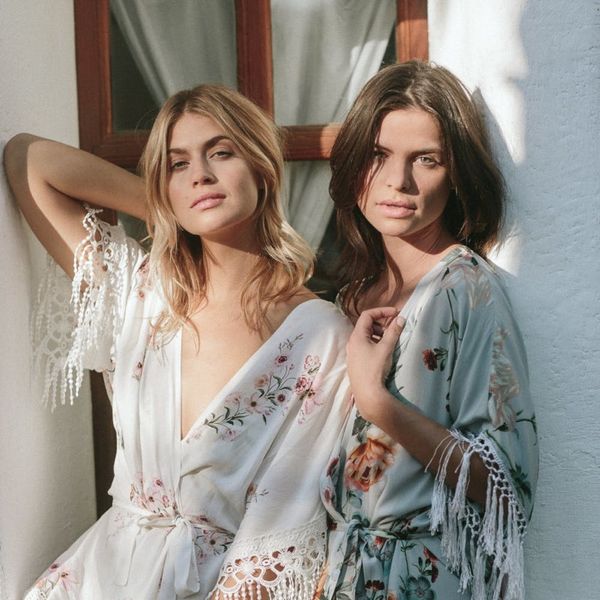 Plum Pretty Sugar is a go-to brand for brides to outfit their bridesmaid squad with dainty, chic floral robes, pajamas, and gowns on their special day. But there’s more of a story behind its creation: Founder and CEO Charlotte Hale officially created the brand after emerging from a period of difficulty, turning it into a full-time gig after originally starting it as a side hustle to her beauty product business. As a major player in the wedding scene, Hale is focused on using her platform to raise awareness of domestic violence and abuse within those marriages and beyond. We chatted with Hale to find out the personal reasons why championing this cause is so close to her heart.

Brit + Co: What was the spark for starting Plum Pretty Sugar?

Charlotte Hale: I had a previous business, a branding and sales agency for beauty products, and also was in a different marriage at the time. As the marriage fell apart, I had to dissolve the former business as well. I started to rethink what I wanted to do as an entrepreneur. In front of my business, I had a retail shop where we sold our beauty products and things I had made that coordinated, like pajamas and robes. I had always loved floral fabrics, and I wanted to still create pajamas, robes, and dresses after the business dissolved. I originally thought it would be a seasonal gift business, so I chose a fun, whimsical name because I thought it would just be a business that would come and go with the seasons.

Then, I saw that there was an opportunity to build Plum Pretty Sugar further. I come from a marketing background, and I thought for a long time about product usage, about when people use robes — not just for going to bed and unwinding, but for getting ready for a big event. That’s when I thought of brides and bridesmaids: I could create this new period of time before the wedding that would engage friends and create even more memories, to make the day last as long as possible.

B+C: Where do you draw design inspiration from?

CH: I first started making robes, dresses, and pajamas after a trip to India to visit my parents, who were living there at the time. I brought back a bunch of fabrics from India, and it became a side hobby. Also, when I was growing up, my family used to travel often, all over the world. Through all these experiences, I have memories from the aesthetics, so I pull from those. Now, I have two young children, so it’s hard to travel as much, but I spend a lot of time studying French designers and looking at gardens to achieve the floral designs. I pull inspiration often when I’m least looking for it.

B+C: Why is the cause of domestic violence prevention particularly important to the brand?

CH: It’s hard to talk about my personal experience with domestic violence (I have had employees that I’ve worked with for years on the brand, and it’s hard to even have a conversation about it with them), but it’s important for me to tell the story. It was truly a terror, and it still has a greater impact on me when people are hurtful in any way, but to be able to overcome this and build a business over the last 10 years makes me proud. If I can do it, so can everyone else.

It was time to use the platform that I did have for good, but it took a long time for me to share this with the world — I just got brave enough to start this initiative this year. I have a daughter now who just turned three, and I want to set an example for her by speaking out. We talk about a lot of things in society, but we don’t talk enough about this. Domestic violence can happen to anyone and doesn’t discriminate. More than anything, it’s about telling a huge success story: that you can be at your lowest point in life, and you can rise.

B+C: What initiatives have you started with Plum Pretty Sugar to raise awareness?

CH: Our first project was partnering with women’s shelters in the Los Angeles area on Valentine’s Day, to give away a robe to the women living there. Women’s shelters, in general, are an important place. When I was going through this, I was in a remote area in another state, and I had nowhere to go except my car. It may seem silly to give them something like a robe, but when you’re in a place like that, no one has ever gifted you something special; you have not been a recipient of kindness.

We’re also currently developing programming like story-sharing events in partnership with the National Domestic Violence Hotline, as well as Loveisrespect.org, which educates high school and college students on healthy, respectful relationships. The hotline is so important because it provides that third-party support, someone to talk to who isn’t part of your inner circle; it’s easy to feel embarrassed by relationship abuse and not want those closest to you to know about it or worry about you. I didn’t have those resources and had to figure it all out myself, so I want to direct others toward those resources.

B+C: Have survivors been reaching out in support of the brand as a result?

CH: It’s still new, because our first initiative was Valentine’s Day, but so far I’ve been getting DMs on social media with people reaching out to say thank you, that they haven’t seen domestic abuse talked about enough. I hope that we can create awareness and that people will eventually feel open to sharing their stories. It’s easy to put it all on yourself and feel like a failure because you’ve been through this trauma. But there’s a process women have to go through to heal, and bringing this forward is part of my process.

B+C: What about the sustainability aspect of the brand? Why is this another initiative you’ve recently launched?

CH: It started resonating when I had children — I started to think about what the planet would look like when they grew up. We lived by this dump in California, and we would see truck after truck heading there. I started to think about creating less trash. Within this category of pre-wedding brands, there are a lot of inexpensive products that girls are wearing one time only to throw them away. Recently we got comments about our brand being expensive, but I’m creating a product that is hopefully not to be thrown away, that is versatile to wear as a cover-up or over jeans, and that has memories attached to it. The same goes for our bridesmaids’ dresses — they’re dresses that we create with versatile shapes and silhouettes, so you can use any dress as an everyday summer dress, or for date night or a baby shower. We want to create a beautiful piece and not a fast-fashion throwaway. We’re also embracing the upcycling movement, and we now have an upcycling bar on our site for excess floral fabric.

B+C: What’s the message you want to send to women with your brand?

CH: Even taking the wedding piece out of it, as women we never know what’s going on in someone’s life. Your best friend could be going through this, and you don’t even know about it. It’s important to be supportive and listen if someone tells you their story, and to be there to direct the person toward resources. I didn’t feel as though I had that support system; everyone I told seemed to not know what to do. Let’s make it a point to talk about the hard stuff — that’s what makes us more powerful.

Mara Santilli
Mara Santilli is a freelance writer based in New England. Her work has appeared in several publications, including Shape and Marie Claire. When she isn't writing, she can be found munching on any piece of dark chocolate she can get her hands on, plunking out her favorite acoustic songs on the guitar, and finding the cheapest Broadway tickets possible. Follow her adventures on Instagram to see where she's headed next.
Entrepreneur
Work
Entrepreneur Girlboss Interview Womens Health
More From Work