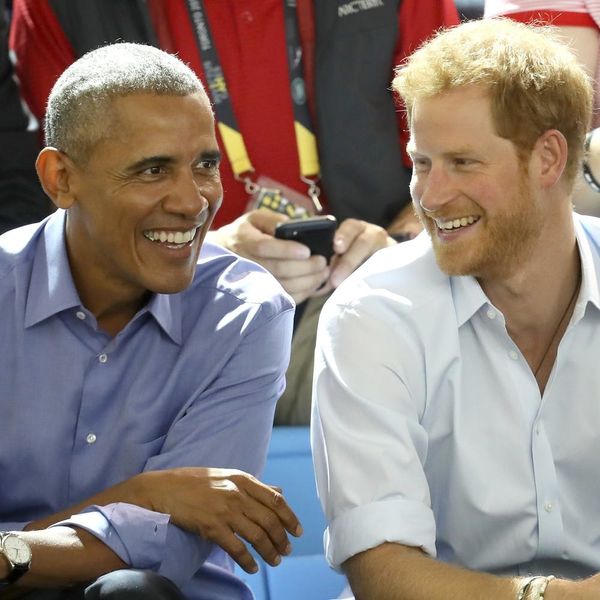 The Royal Family had a unique — and often times hilarious — relationship with the Obamas during their time in the White House: You might recall the time they responded to Prince Harry’s Invictus Games challenge with a video that had the Queen throwing some LOL-worthy shade, for instance. Now, the soon-to-be wed prince is giving us even more reason to chuckle, as he prepares to sit down with Barack Obama for what is sure to be an epic interview set to air December 27.

Taking on the role of guest editor at BBC Radio 4’s Today show, Prince Harry met the former US President at Toronto’s Invictus Games back in September for a 40-minute interview that began with the pair taking some seriously sassy jabs at one another.

Here is a sneak preview of when @BarackObama met Prince Harry for the interview. Listen to the full interview on 27th December on @BBCr4today. pic.twitter.com/p5I1dUdyhx

As can be seen in the teaser clip, the 44th president kicks things off by asking if he needs to speak more quickly or, even better, in a British accent. The prince informs him that he does not, but adds, “If you start using long pauses between answers, you’re going to get The Face.” At that point, he shows off an awfully stern look at which the former commander-in-chief laughs, “I don’t want to see that face!”

Prince Harry's guest editorship of @BBCRadio4 Today programme on the 27th December will feature an interview with former US President @BarackObama. The interview focuses on their shared interest in building platforms for the next generation of young leaders. pic.twitter.com/HaBaW0F5pM

According to the Royal family Twitter, the conversation with Obama will “[include] his memories of the day he left office and his hopes for his post-presidential life, including his plans to focus on cultivating the next generation of leadership through the @ObamaFoundation.”

The conversation with @BarackObama includes his memories of the day he left office and his hopes for his post-presidential life, including his plans to focus on cultivating the next generation of leadership through the @ObamaFoundation.

We’ll DEFINITELY be marking our calendars for this one!

Will you be streaming the full interview? Tweet us @BritandCo.