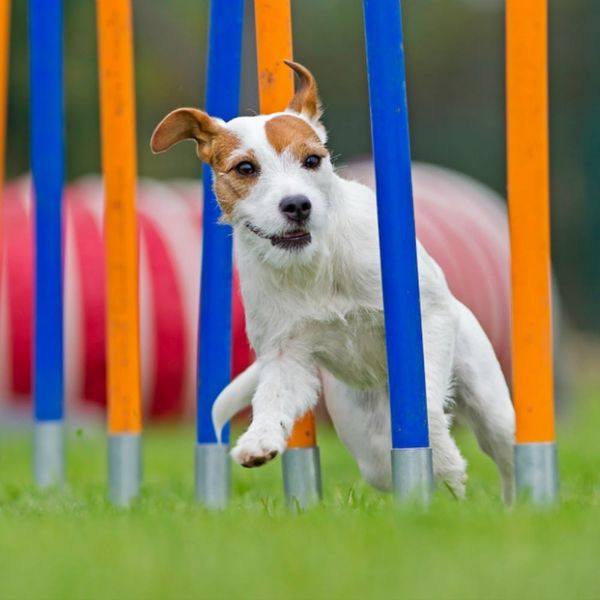 This Sunday, the Puppy Bowl — Animal Planet’s too-cute alternative to the Super Bowl — takes place at 3 p.m. EST and boasts a starting lineup of 49 puppies from 44 shelter and rescue organizations nationwide. In a mock salute to the real thing, it’s “Team Ruff” vs. “Team Fluff,” as canine players chase and tackle each other into the end zone. When the pups make a winning move, however, they are rewarded with squeaky toys and treats instead of high fives. Here are all the details and a sneak peek at some of this year’s players.

Participating fans in New York City and DC had a sneak peek today, as Uber once again teamed up with Animal Planet to bring puppies-on-demand to local dog runs, parks, homes and even offices (if employer-approved) for a $30 fee. Using the Uber app, participants entered keyword PUPPYNYC or PUPPIESDC to unlock a special “puppies” option, appearing on the app only for today. Some of the participating puppies were still eligible for adoption and hopefully they found a home. Last year Uber brought puppies to 10 cities and more than 70 were adopted. All proceeds went to the participating animal shelters.

For the first time this year, fans watching Puppy Bowl can get a virtual reality experience during four puppy practice scrimmages. If that’s not enough cuteness overload for you, don’t miss the halftime segment, starring — you guessed it — kittens! According to ESPN, this year’s kittens may just steal the show. With the Super Bowl taking place in Santa Clara, California, the kitty halftime segment is going to have a San Francisco theme. Expect to see kittens playing with diminutive cable cars, breaking out of “Al-Cat-Traz” and being encouraged to cross a miniature Golden Gate Bridge.

Will you be watching the Puppy Bowl this Sunday? Tweet us at @BritandCo!