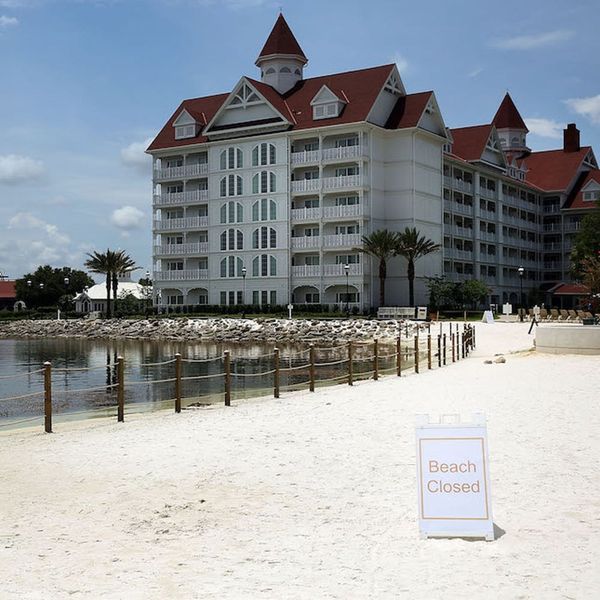 If there’s one thing that a celebrity like Chrissy Teigen has learned about being a new mom, it’s that she can’t seem to do anything right. Going out to dinner with her husband John Legend so soon after their daughter Luna was born? Shame on her. Chrissy breastfeeding said infant daughter between sitting courtside at the NBA finals? Gross. Celebrities (especially women) are definitely very susceptible to harsh judgement. Though not a parent, Demi Lovato even quit Twitter and Instagram this week — albeit very briefly — because of what she saw as a constant stream of negativity. While living publicly does make you more vulnerable to commentary, the outrage recently directed toward two everyday, normal parents who found themselves in the middle of a national news story last week was scathing.

On June 14 at around 9:30 PM, Matt and Melissa Graves were at the Grand Floridian Hotel at Walt Disney World in Florida with their four-year-old daughter and two-year-old son. As the parents and daughter lounged nearby, two-year-old Lane was playing near the shore when an alligator attacked, pulling him into the water. His parents tried but were unable to rescue him, and his body was found the following day.

It's sad that the FWC had to kill 4 innocent gators to look for a kid's body, all because of an irresponsible parent. #GatorAttack

As heartbreaking and unforeseeable as this accident was, many saw it as neglectful and lashed out online with the last thing the Graves needed — judgement and shaming. Some, for instance, felt that the gators needed compassion before the parents.

Before we fall too deep down that dark Internet hole, the good news is that a lot of people also reached out to speak against the parent-shaming and instead give support. Writer Melissa Fenton, a Florida native who says the gator attack was not the norm even by local standards, wrote a Facebook post urging parents to drop the blame and shame attitude, “put away your pitchfork for a moment” and “please just LOVE other parents.” The post struck a nerve. It’s been shared over 530,000 times, and Melissa says that she’s received thousands of comments and emails from people who’ve also lost a child and have lived with the shame for too long, thanking her for giving them a voice. “I’m sorry and angry that for many of you, you’ve had to wait so long to feel this compassion. That you have been both grieving a loss and having to shield yourself from shame is incomprehensible.”

Perhaps most poignantly, other parents began sharing photos of their children playing in the exact spot that Lane had been attacked, proving that it was a tragic and unpredictable event that the parents should not be blamed for.

Jennifer Vinditti, who was a guest at the same resort as the Graves’, shared a chilling, now-viral photo of her young son playing in the same spot just an hour before the attack. “I’ve already seen posts criticizing the parents. I can assure you alligators were not on my mind at all when Channing was in the water,” she wrote. “It’s a tiny beach, surrounded by pools, water slides, a restaurant and a fire pit. I can’t conceive that an alligator would be in such a busy, small space. ‪#‎judgelesspraymore‬.”

Melissa Mitchell, who blogs about motherhood at SippyCupMom.com, points out that the judgmental parents will find any reason to criticize, and admits that it could just have easily been her. “Five years ago, we stayed at the Grand Floridian Resort. My son was three years old and he played on that very beach,” she wrote. “Yes, there are “no swimming” signs and he didn’t go into the water. He COULD have — he’s a toddler and we all know how fast toddlers are. But he was right at the water’s edge like I’m sure hundreds if not thousands of people do at Walt Disney World each year.

“What was supposed to be a vacation at the Happiest Place on Earth has turned into their worst nightmare and I can’t stop thinking that it could have been me,” she continues.

This tragedy is truly heartbreaking. Parenting is tough work — let’s take the lead from these awesomely empathetic women and show all parents compassion.

Have you seen primarily negative or supportive reactions? What do you think? Let us know over @BritandCo.